Kovels On Antiques & Collectibles newsletter is available as a print subscription, or as a digital version that is included in the Kovels Knowledge membership.
Start your Kovels Knowledge Free Trial now or login.

Porcelain made in Japan and marked “Nippon” is featured in a sale report in Kovels On Antiques & Collectibles December 2019 newsletter. The large collection of Nippon was auctioned in Massachusetts and included vases, plates, plaques, humidors and boxes, many pieces embellished with Nippon’s signature coralene and moriage decoration. See the vase with wisteria, gold beading and jewelwork that sold for $1,000 and a portrait plate with coralene that brought $1,200, along with other early 20th century Nippon examples.

Collectors are drawn to the colorful asymmetric shapes of furniture and other household items by the design collective called Memphis. A dedicated auction of Memphis Design was held in Chicago and results showed items from the bold Italian movement are growing in popularity and price. Among the Memphis examples pictured in Kovels’ December issue are the iconic Carlton Bookcase designed by Ettore Sottsass for Memphis that auctioned for $15,000 and a Big Sur sofa by Peter Shire that brought $11,250.

Candy containers, little figural boxes and jars mostly from the early 1900s to the 1930s, were novelties long after the candy that came in them was gone and they are still sweet treats for collectors. Kovels’ pictures a pricey assortment that auctioned in Pennsylvania. Included are a black cat, submarine, early GE refrigerator, taxi as well as others that sold for hundreds and even thousands.

A recent sale in New Jersey included a variety of Christmas collectibles. Find vintage displays, some with moving parts, toys, a circus poster and a grumpy redware belsnickle, along with their prices, in Kovels’ latest issue.

Another Kovels’ December sale report focuses on pressed glass – specifically pressed glass with frosted figural details. Pieces pictured ranged in price from $105 for a milk pitcher with alternating panels of cut glass and frosted classical figures to over $1,600 for a powder jar with a frosted lion finial. And a Kovels’ market report endeavors to answer the question, “What will become of grandmother’s knives, forks and spoons when nobody wants them?” with some sensible guidelines.

Kovels On Antiques & Collectibles newsletter is available as a print subscription, or as a digital version that is part of the Kovels.com Premium subscription. 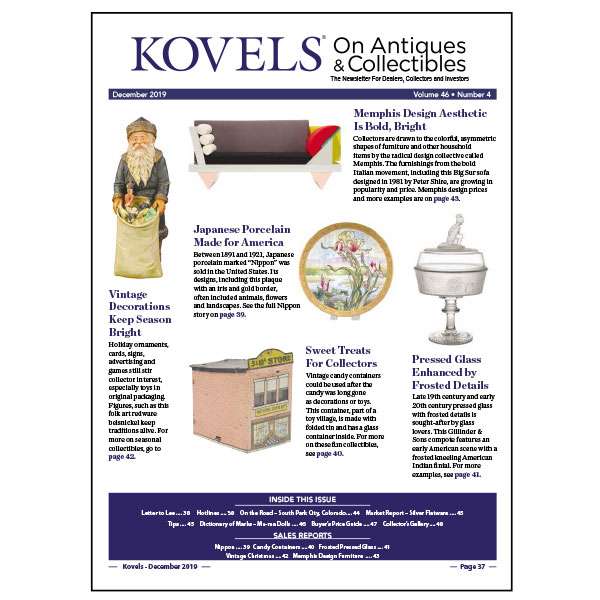