Japanese baskets auctioned in New Jersey are featured in a sale report in Kovels On Antiques & Collectibles August 2018 newsletter. Interest in vintage Japanese baskets is growing and Kovels’ pictures examples of Japanese baskets intricately woven into graceful shapes and signed by their makers. Prices started at $8,000 and soared to $20,000. Two collections of Shirley Temple dolls and accessories were auctioned in Maryland. The dolls were a hit when they were first made in the 1930s, and they are still popular today. Prices ranged from just under $50 to just over $5,000 for early Ideal dolls made of composition, later dolls made of vinyl, dresses and outfits that are miniature costumes from her movies and other toys that bear her image. Examples are in Kovels’ August newsletter.

Antique scientific instruments intrigued buyers at a Chicago auction. More than 400 items sold for prices up to $16,250. Kovels’ latest newsletter pictures examples of an antique barometer, microscope, miner’s transit, telegraph receiver and more that all sold in the hundreds of dollars. A single owner collection of Muncie art pottery was auctioned in Indiana. Kovels’ August issue includes pictures and prices of some of their colorfully glazed and geometrically-shaped vases, planters, bookends, candlesticks, and more. And furniture designed by Thomas Molesworth auctioned in New Jersey and some very pricey examples made of burlwood and leather are pictured in Kovels’ latest newsletter. Made at his furniture shop in Cody, Wyoming, his pieces are known for their Western flair and cowboy toughness.

Kovels celebrates the 300th anniversary of Thomas Chippendale’s birth in England with history and clues to 18th-century Chippendale furniture and 20th-century Chippendale-style reproductions. The Kovels go “on the road” to Mount Dora, Florida, a tourist town famous for hosting one of the largest antiques flea markets in the United States. Kovels’ popular illustrated Collector’s Gallery answers readers’ questions about opera glasses, a toy rocking horse, a set of Wedgwood snack dishes shaped like card suits and a souvenir porcelain ashtray from Germany. August’s Dictionary of Marks dates marks found on Steuben glass. And more than 70 antiques and collectibles are listed in August’s Buyer’s Price Guide. 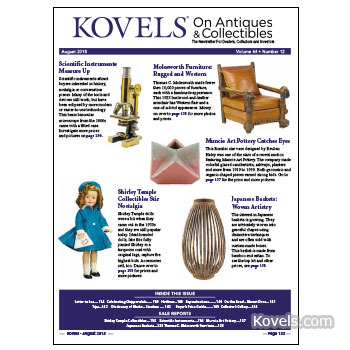