An unusual new type of jewelry, often made of silver or brass, was created in the United States beginning in the 1940s. It was unlike any earlier gold or silver jewelry. Pins looked as if they had been made of spirals of beaten wire; stiff wire necklaces curved to hold on the neck without a clasp; silver rings were set with rutilated quartz, fused glass, or a variety of unrelated cabochons.

Pioneering craftspeople in New York City (especially in Greenwich Village), Chicago, Provincetown (Massachusetts), and San Francisco created avant-garde designs that were very different from commercial jewelry. It is no longer a shock to see jewelry made of bits of wire, moving pieces, and irregular chunks of metal with wood, stone, plastic, ivory, or glass insets, but in the 1950s modernist jewelry was unfamiliar. It became popular with young, educated, middle-class women who wanted something “different.” Its low price, often under $50, added to the attraction.

Some of the craftspeople were recognized artists like Calder and Bertoia. Most were individuals, men and women, who wanted to do it their way. Perhaps the best known today are Betty Cooke, Margaret De Patta, Claire Falkenstein, Sam Kramer, Ed Levin, Paul Lobel, Peter Macchiarini, Earl Pardon, Frank Rebajes, Art Smith, and Ed Wiener. (Ed Wiener made castings for some of his jewelry. When he died, his daughter inherited 1,700 molds. She continued to make his designs but the newer work is marked EW. The old ones are marked Ed Wiener.)

Others who made works collected today are Carlton Ball, best known for his pottery ; Frances Higgins, best known for her glass; and Henry Steig, writer, painter and jazz musician. Other still-unknown craftspeople made similar asymmetrical silver pieces. The modernist style was soon made with less handwork and more duplication so it could be sold in shops across the country. Fortunately, most pieces are marked with the maker’s name or initials.

Some companies of note are: Joseff Of Hollywood
Eugene Joseff was born in Chicago and became designer to the Hollywood stars. During the 1930s, ’40s, and ’50s, his company created much of the jewelry used in the movies, including Gone with the Wind and Around the World in Eighty Days. In 1937 he developed a commercial jewelry line with pieces similar to those designed for films, so women could dress like glamorous movie stars. When Joseff died in 1948, his wife continued the business. The company made jewelry for television stars beginning in the 1950s. Older designs using original molds and stampings continued to be produced, but can be identified as such by the marking Joseff instead of Joseff Hollywood, which was used in the 1940s.
Jonas Eisenberg
Dress designer Jonas Eisenberg accessorized his dark dresses with rhinestone jewelry made with imported Swarovski rhinestone crystals. When thefts of the crystal clips, buttons, and pins showed the jewelry was popular, Eisenberg Ice was established in 1935 to sell just the jewelry. Early pieces were marked Eisenberg Original or with the letter E in script. The name Eisenberg Ice became the mark in 1950. From the 1950s to the 1970s no marking was used, but in the 1970s the Eisenberg Ice label returned. It is still used today on Eisenberg Ice jewelry, which continues to feature clear and colored crystal from Swarovski.
Swarovski
The Austrian firm Swarovski was founded in 1895 to manufacture cut crystals. In addition to optical products and grinding tools, it produced decorative stones from crystal for jewelry and fashion accessories made by others. In the 1970s, Swarovski introduced a series of crystal animal figurines that continue to be popular. Swarovski still makes crystal beads used in jewelry and on dresses, shoes, and handbags. At the end of the twentieth century, it created chandeliers and other large decorative pieces. 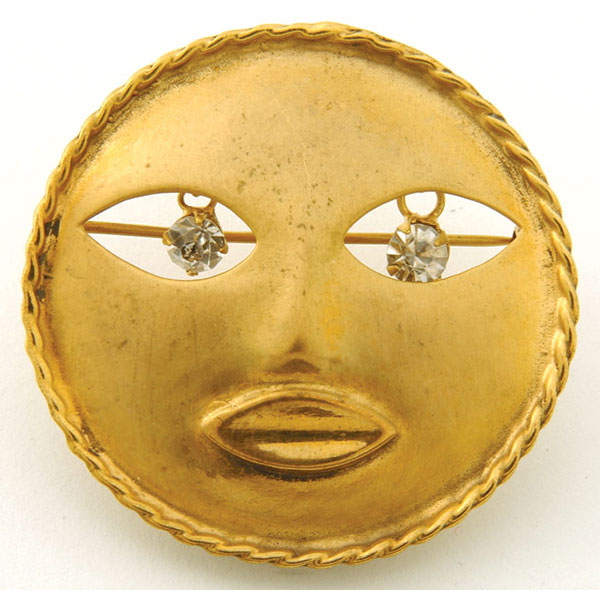 This Joseff face pin has eyes of suspended rhinestones that wiggle. 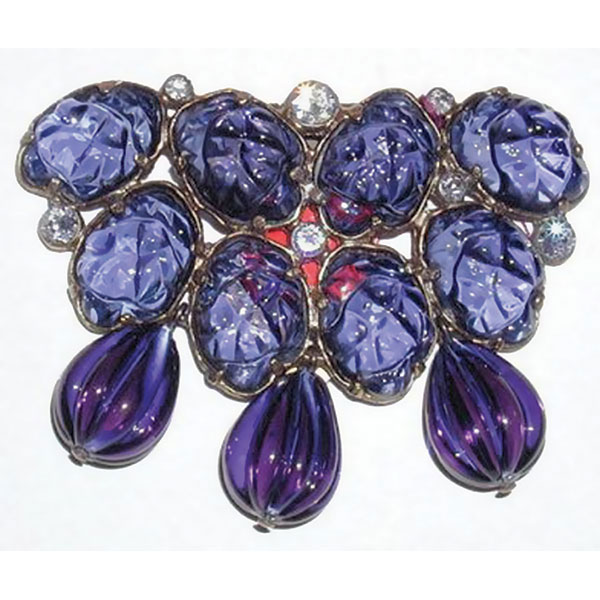 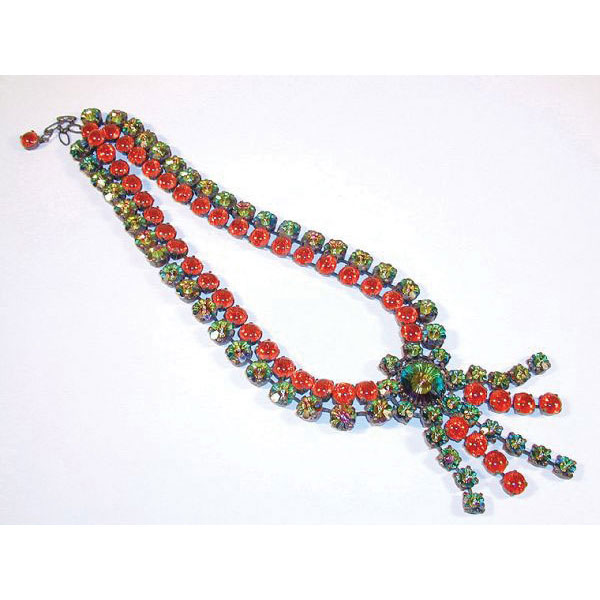 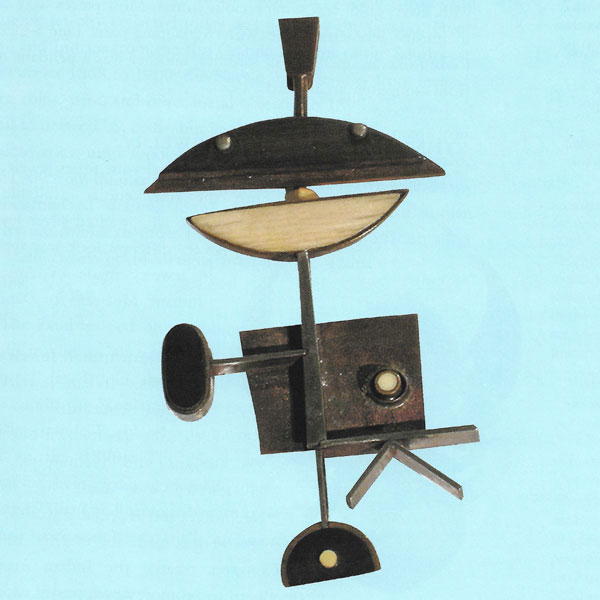 Photo: Private Collection, Miami
Peter Macchiarini (1909-1991), an important creator of Modernist jewelry, started working in California in 1936. He made this pin of silver and polished wood.