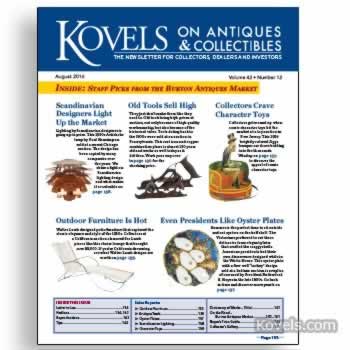 Lithographed tin character toys wound up collectors at a New Jersey toy auction and are featured in a sale report in Kovels on Antiques and Collectibles August 2016 newsletter. See pictures and prices of a Donald Duck that drums, a Pinocchio that walks, a Mortimer Snerd that drives his “tricky auto,” as well other amusing windup toys that have appeal to children of all ages. Collectors clamored for Walter Lamb patio furniture at a California auction. Lamb designed patio furniture that captured the clean, classic style of the 1950s and prices for his pieces ranged from $1,250 to over $3,500. Kovels’ August issue pictures examples made of weathered bronze frames and cotton yacht cording that include a chaise lounge, bench, table and chairs, and even a planter. And Kovels’ latest issue shines a light on the bright market for Scandinavian lighting. Find pictures of midcentury table, floor and ceiling lighting by Alvar Aalto, Poul Henningsen, Tapio Wirkkala and Paavo Tynell that sold from $2,000 to $32,000.

Oyster plates were the focus at a Pennsylvania auction that offered more than 250 plates made of glass, majolica, porcelain, and silver. A $3,600 Wedgwood majolica oyster plate with a zebra pattern took top honors and is pictured in Kovels’ August issue, along with other majolica examples that include a Haviland “turkey” oyster plate, a replica of the plates that were part of the White House china set used by President Rutherford B. Hayes. And useful antique tools attracted woodworkers as well as collectors at another Pennsylvania auction, where the top price of $7,232 was paid for a Stanley combination plane. See a 19th-century wantage rod, surveyor’s slide rule, try square and other tools with quality workmanship and historical value that made bidders reflect “they just don’t make them like they used to.”

Terry Kovel goes “on the road” to the semi-annual flea market in Burton, Ohio with the new owner of an old house to hunt for furniture bargains.The popular illustrated Collector’s Gallery answers readers’ questions about ticket booklets from a 1938 baseball promotion, an autographed Disney picture, a silver caddy spoon (but what’s your opinion?), and printed pillow top fabric.

Kovels on Antiques and Collectibles is available as a print subscription, or as a digital version that is part of the Kovels.com Premium subscription.

Kovels.com, created by Terry Kovel and Kim Kovel, provides collectors and researchers with up-to-date and accurate information on antiques and collectibles. The company was founded in 1953 by Terry Kovel and her late husband, Ralph. Since then, the Kovels have written some of America’s most popular books and articles about antiques, including the best-selling Kovels’ Antiques and Collectibles Price Guide 2016. The website, Kovels.com, online since 1998, offers more than a million free prices, and includes a free weekly email, “Kovels Komments.” It gives readers a bird’s-eye view of the market through the latest news, auction reports, a Marks Dictionary, readers’ questions and answers and much more.