Multimillion-dollar art is breaking records at recent sales. It is no longer the Old Masters – few of the important ones are offered for sale. But late-19th-century paintings to very new sculptures and celebrity-related items are selling into private collections for record overbids. Some are part of price reserve guarantee programs that alter the meaning of “record price.”

A waterlily painting by Monet was $84.7 million.

And a 1923 Matisse painting, “Odalisque couchée aux magnolias,” a reclining nude, was won for $80.7 million.

A 1608 drawing by Peter Paul Rubens was the only antique piece to set a world record, $8.2 million, almost double the old record.

A Sevres dessert service that belonged to Napoleon long before it was bought by Peggy and David Rockefeller set a new record when it was sold for $1,812,500.

And a Jeff Koons steel “Orange Balloon Dog” sold for $58.4 million, making it the most expensive art work by a living artist, only to see the record broken by David Hockney’s 1972 “Portrait of an Artist,” which auctioned for $90.3 million. He held the title for six month until May 2019 when Jeff Coons steel “Rabbit” exceeded that record, selling for $91.1 million. The price for the Hockney and Coons would have been the same ($80 million plus buyer’s premium) except the buyer’s premium at Christies, who sold both pieces, increased during the 6 month period.

And although it didn’t set a record but is probably an unlikely item to be considered important American art, an original rendering of the comic strip “Good Ol’ Charlie Brown” for the October 21, 1984, newspapers sold for $33,825. 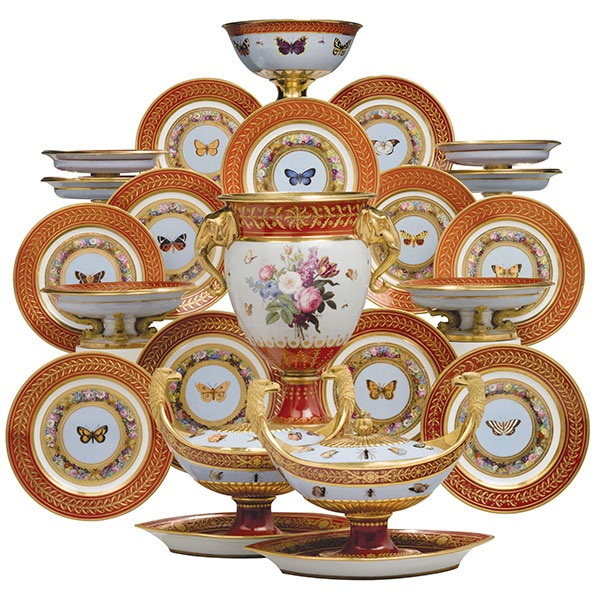