Lighting can strike twice — within the same few blocks. Just two week after the discovery of a lost Jacob Lawrence painting in a New York City apartment, another panel in a 30-panel series “Struggle: From the History of the American People” has been found in a nearby building. A nurse living on the Upper West Side read about the discovery of the Lawrence painting and how the series of paintings were on view at the Metropolitan Museum of Art, right across Central Park. The name Jacob Lawrence, one of the few Black artists of his time to gain recognition in the art world, sounded familiar. She realized it was the name on a small painting — a gift from her mother-in-law — that had hung in her dining room for two decades. A 1996 New York Times profile on Lawrence was taped on its back. The nurse told her 20-year-old son, who found a black-and-white photograph being used as a placeholder for Panel 28. The “location unknown” painting was titled “Immigrants admitted from all countries: 1820 to 1840—115,773” and it was their painting

After three days of unreturned calls to the museum, the nurse and her son went in–person to request someone look at her photos of the painting. Within hours, two co-curators of the Lawrence show and a paintings conservator were making a second trip to an Upper West Side apartment to verify the authenticity of a Lawrence painting that had not been seen publicly since 1960. Unlike the owners of the other recently discovered panel, the nurse who owns Panel 28 said she would consider selling it.  Panel 19 sold for $413,000 in 2018.

What’s on your wall? 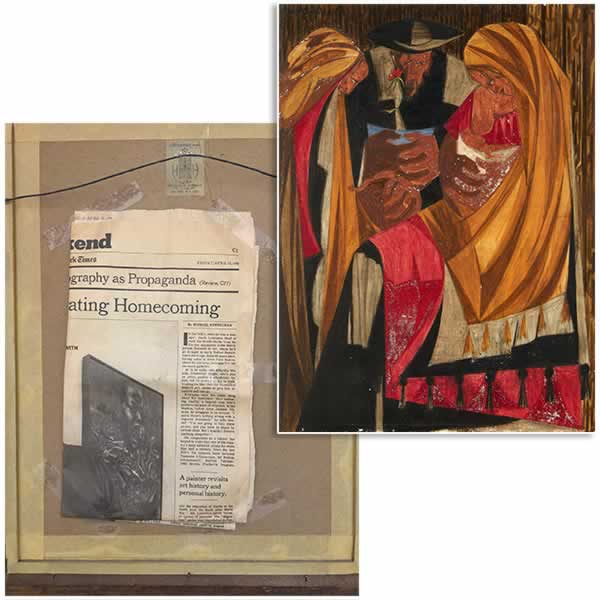 The long-missing Panel 28 from Jacob Jacob Lawrence’s series “Struggle: From the History of the American People,” along with a newspaper article about the artist taped on the back.
Photo: New York Times