A man who runs a house clearance company in England found a strange necklace with carved bone and antlers on a woven cord in the empty building he was clearing. He intended to take it to a jumble sale (flea market) to sell for 15 British pounds. Luckily, an antiques auction house was nearby and the man decided to ask Ewbanks Auctioneers what they thought. They realized it was an old ethnic piece and priced it between 60 and 100 pounds. Before the sale started, the phones were busy with preliminary bids and the auction house realized others knew what the necklace was. There were three competing bidders, one from Australia, one from Europe and one in the room from Britain. The winning price of 99,000 pounds – that’s $157,917 including buyer’s premium and fees – was met with applause. The necklace is a rarity, thought to be a fertility necklace from the Cook Islands in the South Pacific Ocean. There is an identical one in the Museum of New Zealand. 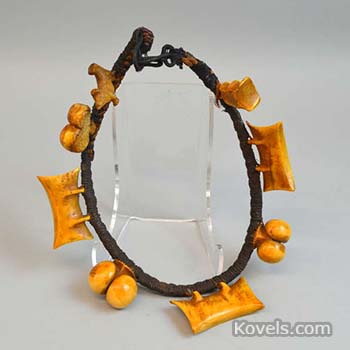