Flags and buttons from presidential campaigns that were auctioned in Dallas are featured in a sale report in Kovels On Antiques & Collectibles July 2019 newsletter. Political collectibles are as hot as ever. Kovels’ pictures a two-sided banner with slogans for the 1848 campaign of Zachary Taylor (who won) that sold for $200,000 and a flag-style banner with slogans and a folk-art portrait of the 1844 candidate Henry Clay (who didn’t) that brought $37,500, along with other pricey examples.

A Chicago auction included chairs and tables designed by modernist pioneer Ludwig Mies van der Rohe. Kovels’ July newsletter pictures a pair of his iconic Barcelona chairs that auctioned for close to $7,000, as well as his Barcelona table and other pieces. Another Chicago auction included modernist jewelry. Prices are on the rise for the abstract designs and asymmetrical shapes, many decorated with enamel or stones, and Kovels’ pictures several silver and gold pieces, all marked by notable designers.

Bicycles of all kinds sold at an upstate New York auction and Kovels’ latest issue pictures examples from antique to vintage. See an 18th-century tandem that sold for $4,000, a 1930s child’s tricycle that went for $300 and a cool 1960s baby blue ladies’ bike by Schwinn that was a bargain at $80, as well others in between.

Bells of all kinds are popular collectibles and favorites include school bells like the one recently auctioned for $3,000. It’s pictured in Kovels’ July newsletter, along with other examples from the Ohio auction – a church bell, railroad bell, hotel front desk bell and several figural bells.

And, finally, a selection of German half-dolls sold in New Jersey are pictured in Kovels’ July issue with their prices. Popular from about 1908 until the 1930s, half-dolls are delicate porcelain sculptures of lovely ladies from the waist up. They are decorated with elaborate hats or hairdos and unusual arm poses and were used as decorative covers for pincushions, teapots and cosmetic accessories.

Kovels’ July newsletter features an article about painted garden gnomes. The popular illustrated Collector’s Gallery answers readers’ questions about a Rosie the Riveter doll, a silver teapot with a menorah mark, an antique typewriter and a Noritake dresser tray. The July Dictionary of Marks lists the names of popular vintage Pyrex patterns. And more than 70 antiques and collectibles are listed in the July Buyer’s Price Guide. 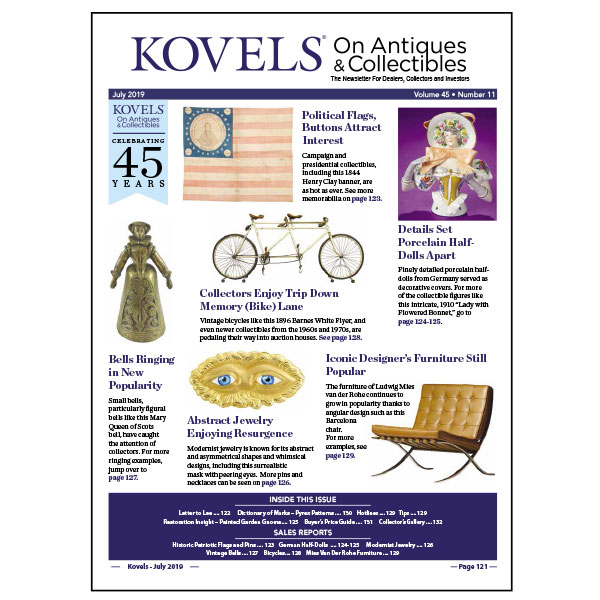