But here’s the scoop on cones. The ice cream cone was invented in 1896 by Italo Marchiony, an ice cream pushcart vendor in New York City. He wanted to stop customers from stealing his serving dishes. In 1903, he patented a special mold for waffle cups with sloping sides. But there are other claims to the cone’s invention.  A popular story says that on July 23, 1904, an ice cream vendor at the 1904 St. Louis World’s Fair ran out of paper dishes, so he made a deal with a neighboring vendor of “zalabia,” a waffle-like pastry. They began rolling up the waffles to hold ice cream, which was a big hit with customers. Historians say that there were more than 50 ice cream vendors at the 1904 World’s Fair, and it’s likely that several served ice cream in some sort of edible container. And the idea of putting a scoop of ice cream in a waffle-type cone exploded in popularity at the 1904 St. Louis World’s Fair, 110 years ago.

W.W. Turnbull, a visitor to the World’s Fair who learned the candy and ice cream trade as a boy, saw fairgoers enjoying ice cream out of the rolled waffles. In 1907, he invented the first ice cream cone-making machine. He started Turnbull Cone & Machine Company in Cincinnati to sell cone-making machines and pre-made cones. The company relocated to Chattanooga, Tenn., in 1918 and grew to become one of the country’s largest ice cream cone producers. Turnbull started specializing in melba toast in the 1940s; the company sold the cone-making business in 2002.

Pictured here is a “Turnbull’s Crisp Clean Cones” soda fountain ice cream cone dispenser from about 1920. It’s 38 inches high, steel with a glass door, and holds three stacks of cones. A light bulb on the inside is meant to keep cones warm and crispy. There are two levers on the outside that when pushed down, release the bottom cone which slides down the chute. It sold for $960 at a Rich Penn auction in Iowa.

“Eat a cone every day. You’ll feel better in every way.” 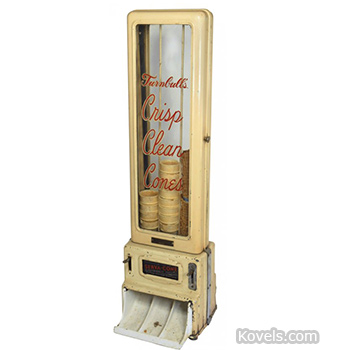