Q: I inherited this clock from my grandmother in 1999. She told me it was from Tryon, North Carolina, but I don’t know anything more about it. I understand it to be an annunciator clock. There are drop-down placards with the names of various rooms written on them behind the six rectangular windows. The knob on the very bottom of the cabinet resets those placards. The placards would be raised and out of view, and when someone in one of those rooms wanted to summon help, they pressed a button and the corresponding placard would drop down and be visible in the rectangular window. The clock still runs by winding it up with the key. It’s marked “The Holtzer Cabot Elec. Co., 92 Franklin St., Boston. Holtzer’s Patent.” The clock hung in my grandmothers kitchen and I’ve always loved it. I’d love to know more about this clock and an approximate value.

A: Charles W. Holtzer started Holtzer Co. in Brookline, Massachusetts, in 1875. The name of the company changed as Holtzer worked with different partners. George E. Cabot joined the company in 1887 and the name became Holtzer & Cabot Electric Co. in 1889. The business was located on Franklin Street in Boston by about 1893. The company made clocks and annunciators for homes and hotels, burglar alarms, fire alarm boxes, doorbells, telephones and telephone equipment, small motors and many other electrical products. It became best-known for its electric motors. The name changed a few times before the company closed in 1972. Holtzer-Cabot Electric Co. held several patents. This patent might be the 1918 patent for “new and useful improvements in Annunciators.” Annunciators were used to call the help in a large house. Most annunciators were a separate electrical device, usually kept in the kitchen near the help’s quarters. Although the clock is key wound, the calling or signaling system is electric, probably run by batteries that were charged by turning the hand crank. It’s not very useful today, so it’s worth about $500 if working. 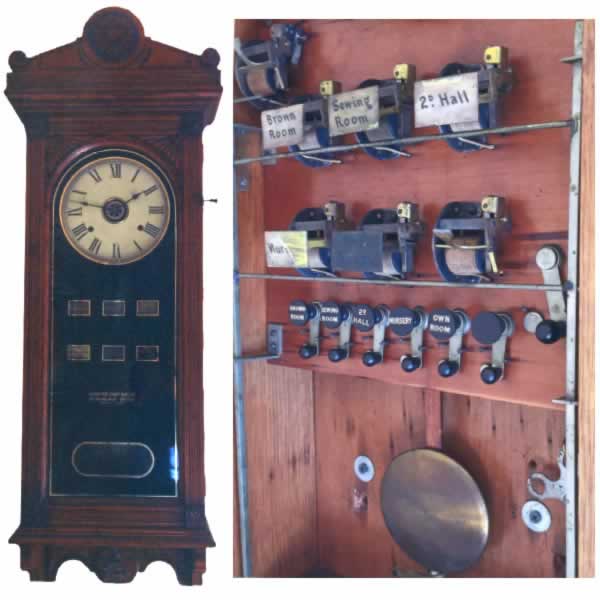