Q: In 1984 I inherited a Royal Doulton Winston Churchill figural loving cup that says it was made during the “Battle of Britain” as a tribute to Winston Churchill, the Prime Minister. It’s about 8 inches high and is shaped like Churchill’s head. It’s is all white with two black handles. I saw a similar one at an antiques show in the late 1980s marked $10,000. What’s it worth today?

A: Royal Doulton made a series of loving cups with pictures of royalty and other famous people. Most sell for a few hundred dollars. Winston Churchill became Prime Minister in May 1940. In the Battle of Britain, which took place in September 1940, the Royal Air Force defeated the German Luftwaffe and prevented Hitler from invading Britain. Royal Doulton’s Art Director, Charles Noke, made the model for this loving cup in 1940. It was made without decoration because of wartime restrictions on materials. The image of Churchill wasn’t considered a good likeness and the loving cup was made for less than a year. The few loving cups offered for sale in past years were priced at $1,000 to $5,000, but not all were sold. The attainable retail price seems to be $1,500. Churchill died on January 24, 1965. 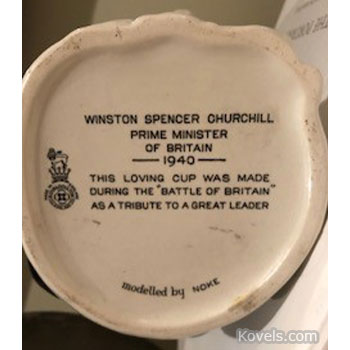 One response to “Churchill Loving Cup”