Reproduction or “Made in China” Fenton art glass has been appearing on online auction sites and even in antique store displays. You can spot the true art glass made by Fenton Glass artisans in America. Collectors should always look for Fenton glass marks, artist signatures and artistic style to determine if the piece is authentic.

Fenton Art Glass, known for its beautiful colors and patterns, was founded in 1905 by brothers Frank L. and John W. Fenton in Martins Ferry, Ohio. They began by painting decorations on glassware made by nearby manufacturers. The brothers opened their own factory, the Fenton Art Glass factory, in Williamstown, West Virginia, in 1907. “Iridescent ware,” now known as “Carnival” glass, was introduced that same year.

Two of the most frequent reproductions seen are a small vase with a light blue crest and painted red roses on milk glass, and a taller vase usually either purple or green. Both have the ruffled rim, a hallmark of Fenton pieces. Neither is marked Fenton, or signed by the artist. Only very early pieces were unmarked.

1. How to identify authentic Fenton:
2. Authentic Fenton, except for the very earliest pieces, is marked.
3. The artist always signed the decoration, except very early pieces.
4. If the painting style is rough, it is a reproduction. Fenton had talented artists.
5. Pieces with a Fenton International logo were outsourced by Fenton to be made in China in later years. The Fenton pieces were functional housewares, not art glass collectibles, according to Butterfly Net, published by the Fenton Art Glass Collectors of America.
6. Fenton designed — but didn’t make — shapes for the florist company Teleflora. The Teleflora vases, while looking like Fenton, were made in China. Teleflora has a thick base.

Photos are courtesy of the Butterfly Net, a publication of the Fenton Art Glass Collectors of America (FAGCA).

Neither of these is Fenton. The painting style is rough and the vase isn’t signed by the artist. These are found frequently on eBay and in questions on Facebook groups.

These forms were designed by Fenton but were not made or decorated by Fenton. The thick glass in the base is a giveaway that it wasn’t made at Fenton.

Fenton Tangerine stretch glass fan vase, No. 847 from the 1920s, will be listed in Fenton books that cover that period.

Roses on Paisley covered candy box made by Wave Crest for Fenton Art Glass Collectors of America in 2005. Here, the paisley relief extends up onto the cover’s finial.

During the 2017 collector’s convention, the Fenton Gift Shop had several old Log Cabin on custard items (made 1976 to 1983) for sale that must have been found in some forgotten corner of the factory. They were priced high, and the rest of the found pieces went quickly.

A Dave Fetty/Kelsey Murphy/Robert Bomkamp carved mosaic “Maiden Fern” vase was made by making the entire vase the overlaid mosaic color and then carving away the mosaic to make the design against the underlying ebony satin. This produced a thin-walled vase which often broke during carving, leaving a finished example with an expensive retail price of $695. This one was No. 74 of a limited edition of 350. 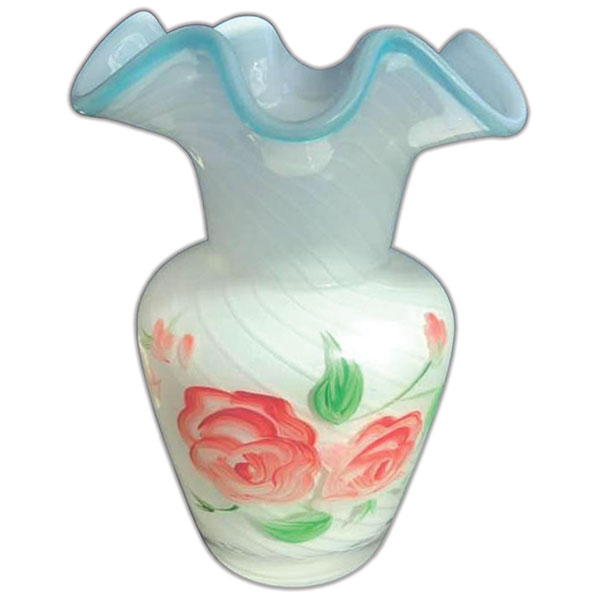