Folk art is created by people who aren’t trained artists. Some think that folk art, like antiques, must be old, but the work now refers to amateur art, both antique and vintage. Folk art is based on traditional forms. Both of these hand carved wooden rabbits look like good examples of American folk art. The spotted rabbit is 57 inches tall. He is holding a carved black rectangle that probably was painted to look like food. The other rabbit holding the carrot is only 27 inches tall. It has real marble eyes. Both have carved tails.

We bought one of the rabbits at an antiques extravaganza when we were taping our TV series. It was in front of a truck with dozens of similar new rabbits made in the Philippines. We kept it in the garden for a few summers then moved it inside the house. The paint is aging and the wood is cracking. It is made in three pieces, each ear is attached to a peg.

The smaller rabbit was purchased at an auction at the home of a man who carved tombstones. But he also carved small, simple, unpainted animals and birds, Uncle Sam, the Statue of Liberty, and a very tall painted totem pole of presidents’ heads. He modeled large, unpainted cement animals. The rabbit was part of a group of painted carvings made to amuse his grandchildren.

Which is more valuable? It’s the rabbit with the carrot. The now-recognized folk artist was Silvio Zoratti (1919-1992) who had hundreds of carvings sold in the 1992 auction. Some were marked with an impression of his name and the name of the animal. The rabbit was in the garden. Today, painted Zoratti figures sell for over $500. The tall rabbit is a commercial figure that would sell for about $50 to $75 to be used as a decoration. But beware. We have seen several of the large rabbits offered for sale as vintage folk art. 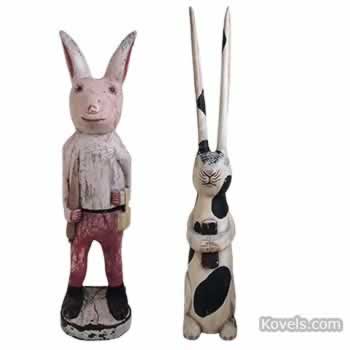