It was certainly not what you usually find in an old cigar tin. One of only three artifacts ever recovered from inside Egypt’s Great Pyramid was recently found in a cigar tin decorated with an Egyptian flag in a Scottish university collection. The fragment of cedar wood was first discovered in the late 19th century but had been missing for more than 70 years.

Even though records said the fragment had been donated to the University of Aberdeen, no one knew where it was. Last year, a university assistant curator, originally from Egypt, made a chance discovery in its Asia collection. Knowing that a small cigar tin she found there bearing an old Egyptian flag did not belong with the other pieces, she cross-referenced it with other records.

The 5-inch fragment, now in several pieces, was one of three objects first discovered in the Great Pyramid’s Queen’s Chamber in 1872 by engineer Waynman Dixon. The so-called “Dixon Relics” were a small dolerite ball, a copper hook, and the wood fragment. The ball and hook are now in the British Museum, but the wood had been missing. It made its way to the Scotland because of a link between Dixon and a medical doctor named James Grant who studied in Aberdeen and went to Egypt to treat cholera in the mid-1860s. Carbon dating dates the wood at somewhere between 3341 and 3094 BC, long before the construction of the pyramid. 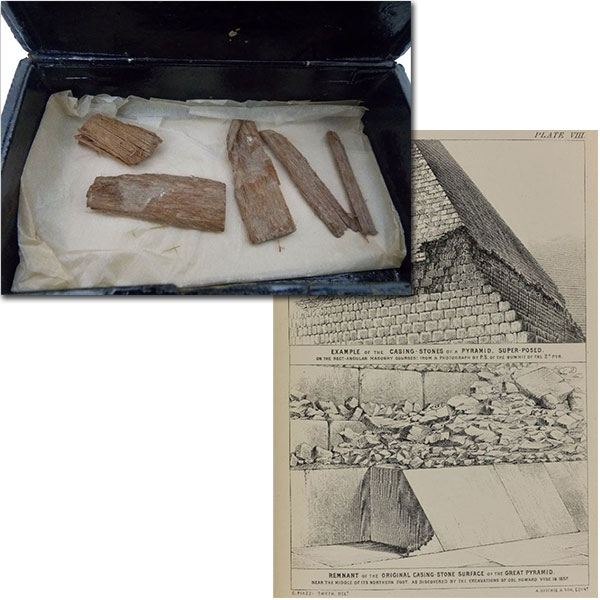 The wood fragments were discovered by University of Aberdeen Curatorial assistant Abeer Eladany while reviewing items housed in the university’s Asia collection.