Dedicated collectors know that there are still great finds at flea markets, thrift stores and charity sales. Last month we heard about two. At a charity antiques sale of donated items, there was a higher priced early-bird ticket bought mainly by dealers They bought silver by weight (less than melt down) and jewelry. Almost every gold ring sold before the official opening of the show. A straggler who came about an hour later noticed a black and white dinner plate that looked like it could be Chinese (it had an unglazed foot ring on the back). She remembered a similar one in a book. At home she came up with the book and found the identical plate — a rare piece of Chinese Export china that pictured a woman sewing called “The Embroidress.” Value $800-$1,000.

Last week a Goodwill employee in New Jersey was examining a pile of stored newspapers and other things that seemed to be reproductions. He pulled out a framed yellowed newspaper dated Dec. 28, 1774, that had an engraving of a snake cut in pieces, an early American political cartoon. The finder got permission to take the paper to experts. It was identified as an original, not a copy, of The Pennsylvania Journal and Weekly Advertiser, one of only four copies of that edition known to exist, with the pre-Revolutionary War “Unite or Die” masthead. The page was in good condition, probably because it was framed with glass on both sides. Estimated value: $6,000 to $16,000. Goodwill hasn’t decided how to sell it yet. Bargains come to those who can recognize a rare antique. And luck helps too. 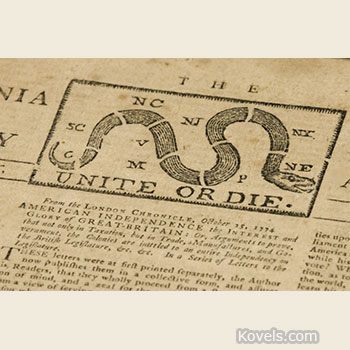