The easiest type of picture to sell is what the trade calls a “sofa” picture. Typically, it is rectangular, wider than it is high, about 40 inches by about 20 inches. The picture should be a landscape, portrait, abstract, still life, or other “pretty” picture. So what to do with a painting of a battle that is “too large to move”?

It was in a house in Connecticut, and it had been included with the building when the house was sold in 1987. In 2017, the homeowners called an auction house to sell their art collection, including the 64-square-foot painting. They were downsizing. The painting of a group of men on horseback riding down a street was estimated at $5,000, but the auction house soon discovered the painting, “Secret Departure of Ivan the Terrible Before the Oprichnina” by Mikhail Panin, was one of 64 works of art stolen by Nazis from Ukraine’s Dnepropetrovsk Art Museum during World War II. After discussions with the FBI division that recovers stolen art, the Ukrainian embassy showed a black-and-white photo of the painting in the museum and other evidence that confirmed it was the stolen picture. The owner, Gabby Tracy, was a Holocaust survivor. Her father died in a concentration camp, and she, as a child, was kept in a Jewish ghetto. Her family went to the United States after the war. She said she was delighted to give the important picture back to the museum so, once again, Ukrainians can see an important part of their history. 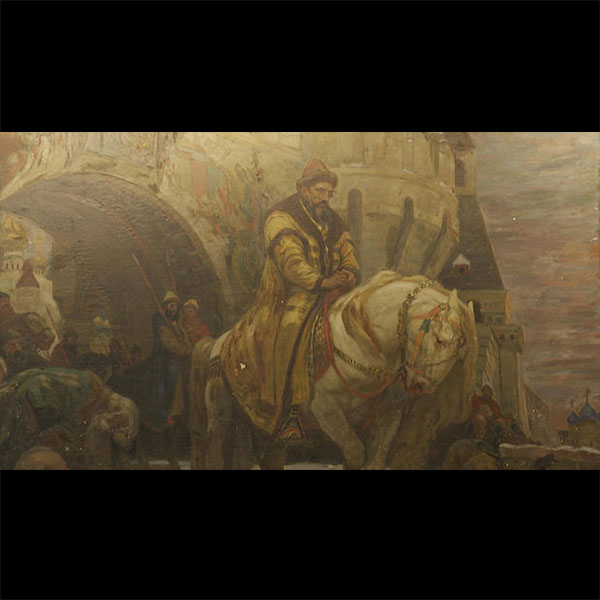 One response to ““Sofa” Painting a Treasure, Returned to Museum”