While beer served in hearty mugs might be the beverage of choice on this day, nothing is as iconically Irish as Belleek pottery decorated with delicate shamrocks on a basket-weave texture. It was designed in the 1880s by artist Frederick Slater to portray the “essence of Ireland.” The pattern is based on the weave used in wickerwork baskets commonly found throughout Ireland. The design also uses the stems of the shamrocks to shape such features as the handles and details of the design. Belleek Pottery Limited in County Fermanagh, Ireland, has made Belleek pottery since 1863. The firm, which is still working, gained the legal right to use the name “Belleek” as part of its trademark in 1929. No other companies may use the word “Belleek” with a capital “B” as part of their mark or advertising

If you are a budding collector of shamrock-patterned Belleek here are some things to know: Belleek made in Ireland is marked with an Irish wolfhound, a harp, a round tower, and a shamrock with the name Belleek imprinted on it. This mark can be green, brown, black, red or blue. The words “Belleek-Fermanagh” were also used. Factories in the United States produced belleek (notice the lowercase “b”), but the designs are easily distinguished from the Irish products. 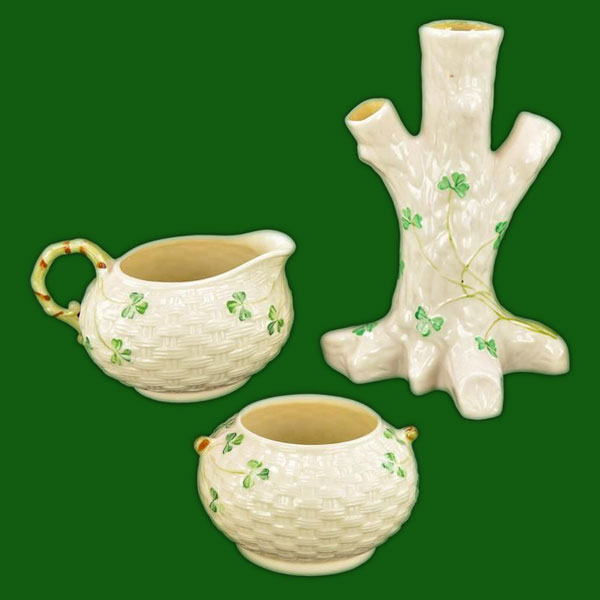 Belleek sugar, creamer and bud vase, all marked, sold together as a lot for $31.
Photo: Donley Auctions