The Barbie doll has a new look and a running mate for her days as candidate for president. The 2016 President Barbie has her original curvy shape and comes in six different skin tones. Her vice presidential candidate is also a woman. The boxed set has two dolls standing next to a podium with a sign “First All Female Ticket.” The back of the box has more sayings to encourage girls. A blonde Barbie first ran for president in 1992. She had a ball gown and a suit. President Barbie had appropriate wardrobe changes in four other elections years, 2000, 2004, 2008 and 2012. 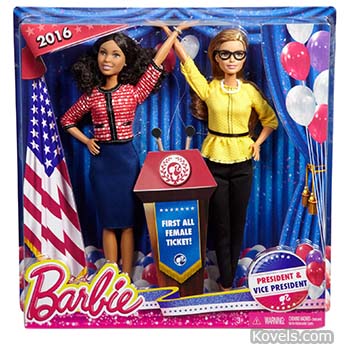