Early photography collectibles from cameras to photographs are becoming more popular and prices are rising. The art produced by a camera is important to some collectors, especially black and white photographs. Old cameras, including stereo realists, can be used with special film that is now available. The most famous historic pictures are probably the horse pictures taken by Eadweard Muybridge in 1878. California’s wealthy governor Leland Stanford wanted to know if a horse ever had all four legs off the ground at the same time when galloping. He actually hired Muybridge to prove he was right – that a horse is actually airborne for a short time. Muybridge set up many cameras with wires that were stretched across a race track. The horse tripped the wires to set off the cameras. This stop-motion technique was the first step towards motion pictures. Muybridge continued investigating and took thousands of pictures of animals and people in motion to learn how they move. Some of the original pictures are still offered in auctions. A block of pictures of a running horse was estimated at $2,000 to $3000 last year. There is a story that Stanford needed the information to win a large bet, but that now seems to be a myth. 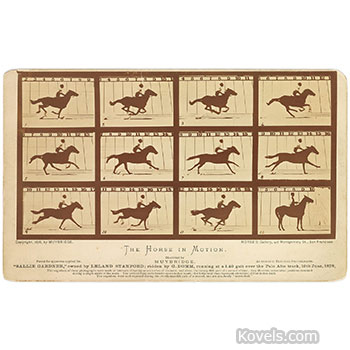