The most talked about piece of art in this year’s Art Basel show in Miami is a banana and some duct tape put together with the imagination of a well-known artist. The banana was duct-taped to a wall — no frame, no paint. Only one banana, ripe enough to eat, presented as a work of art called “Comedian” by Maurizio Cattelan. There were two editions of the “concept art” and each sold for $120,000. There may be another priced at $150,000. There are no suggestions for how to conserve the banana once it starts to decay and shrivel, but the buyers were told that they could replace the banana as needed. Too bad there wasn’t a banana sticker like the ones I collect!

Later in the week, the banana was taken right off the wall and eaten in full view of the large, curious crowd. Some were appalled that the artwork had been destroyed, but others heard the eater announce he was a “hungry artist” engaging in performance art.

We heard from an unnamed source that the gallery replaced the banana and duct tape with a piece of blank white paper covering the spot where the artwork was displayed. An intruder wrote on the wall in red lipstick, “Epstien didn’t kill himself,” and yes, Epstein was misspelled. Vandalism? Or more performance art?

The artist, Cattelan, is best known for an earlier work, a functioning 18k gold toilet worth $6 million. It was made in 2016 for the Guggenheim museum in New York City and installed for an exhibition at Blenheim Palace in England in September. But it was quickly stolen. Three men have been arrested. The insurance company is offering a reward of $124,000 if the toilet is safely returned and the thieves arrested because the company wants to be sure the thieves are not rewarded, and that the artwork is not melted down. 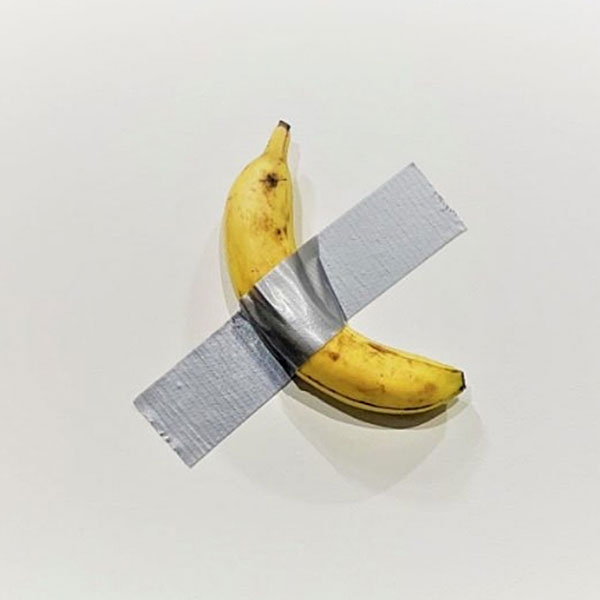