Will Your Valentine Card Be Worth a Fortune?

What could be more fun than hunting for valentines? They’re pretty and romantic and very collectible. Antiques and collectibles expert Terry Kovel answers five questions to help get a new collector started.

1. What makes a valentine valuable? The most valuable valentines have clever sentiment and designs—they are pretty or unique. Collectors also look for valentines that relate to the news of the day or that are signed by someone significant. Valentines can also function as decorative hangings. Terry collects valentines and displays them. “I actually have some unusual Victorian valentines framed in my powder room. The best one has lace trim with a small wax cupid figure in the center.”

2. What kinds of valentines are available? Fancy handmade cards made of paper, lace and ribbons that were pasted together like those by Esther Howland, the first person credited with the commercial mass-production of valentines in the mid-1800s in Worcester, Massachusetts, are very desirable and sell for a lot of money. Collectors love Victorian three-dimensional valentines that feature die-cut images that open into three-dimensional views. Later versions from the early 1900s with folded honeycomb paper that pops open into a design are also expensive. Some collectors look for postcard valentines, die-cut school-type valentines from the 1920s, ’30s and ’40s, and mechanical valentines with moving parts from the 1950s. Avoid the inexpensive single sheet “penny dreadfuls.” They are insulting comic valentines from the 1920s—very inexpensive but hard to sell.

3. Are there any new valentines that have collecting potential? Terry suggests looking for valentines that reflect current news, pop culture or historical events. “There’s a lot of history in valentines. Look at the hairstyles, clothes, cars or trains that are pictured. They can help date them.” Consider valentines with Disney and other characters from books, cartoons, movies and television shows. New technology has also introduced talking valentines—cards that include a song or the sender’s recorded words. “But be careful with these,” she cautions, “because they stop talking eventually.”

4. Where does an interested collector find old valentines? Terry suggests starting your search in the attic at Grandma’s house where “there may be some tucked away in a box for sentimental reasons.” Dealers who specialize in valentines can be found at flea markets or ephemera shows. Look at house sales and in thrift shops, too. Great valentines may be found in old scrap books.

5. How do I find what an old valentine is worth? Current prices can be found in Kovels’ Antiques and Collectibles Price Guide and in Kovels’ online price guide. Terry Kovel also suggests checking prices at ephemera shows or through organizations that specialize in valentines, like the National Valentine Collectors Association. 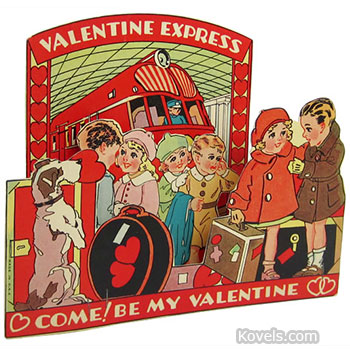