What Happened to Apollo Memorabilia?

The TV show “Lost in Space” could now be updated to be “Lost Our Space Memorabilia.” NASA currently is celebrating the momentous anniversary – and meticulous groundbreaking science – of Apollo 11 and the July 20, 1969 landing on the moon. Astronauts Neil Armstrong and Buzz Aldrin took that “giant leap” for mankind, forever giving new meaning to the phrase “earthbound.”

But when it comes to the many irreplaceable items brought back from the six Apollo moon landings between 1969 and 1972, NASA has not been so meticulous. NASA has lost track of 160 of the 270 moon rocks given as gifts to other nations and each U.S. state from the Apollo 11 and Apollo 17 missions. Twenty-four are missing in the United States.

The source of the gifts was a brick-sized rock brought back by Apollo 17. It was broken into fragments and sent to 135 foreign heads of state and the 50 U.S. states. Each “goodwill” moon rock was put in a Lucite ball and mounted on a wooden plaque. In addition to the historic value of each rock, there’s a monetary impact for the missing or lost fragments: Recently, $5 million was offered on the black market for a Honduras goodwill moon rock.

Some of the goodwill rocks are in museums and scientific institutions, many are in storage, some were destroyed or stolen.

Another example of misplaced cultural treasures was the bag labeled “Lunar Sample Return” and used by Armstrong. Collector Nancy Carlson bought the bag at an auction for $995. She sent the bag to NASA, which confirmed it was Armstrong’s and that it still contained lunar dust. The bag had been seized from a space museum president’s garage. The president was convicted of fraud and stealing from the museum. The bag was misidentified and became part of an auction conducted by the U.S. Marshals Service.

NASA tried to keep the bag and its dust. They lost in court. Carlson received just over $1.8 million for it at a Sotheby’s auction in 2017.

Many Apollo 11 memorabilia has found its way into private auctions, too. A recent Boston auction included Buzz Aldrin’s Apollo 11 American flag, attached to its original certificate with the Apollo 11 insignia.  It sold for $20,804.  A photograph signed by all three Apollo 11 astronauts (Armstrong, Aldrin and Michael Collins) brought $16,079. 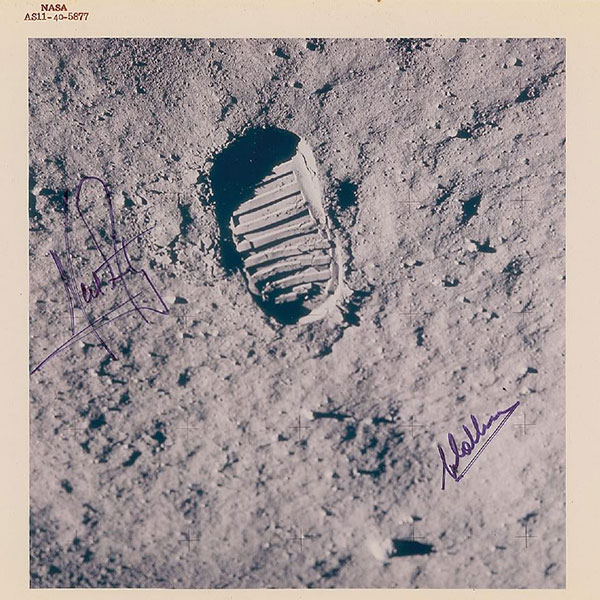 2 responses to “What Happened to Apollo Memorabilia?”