It started with a “mustache cup,” which protected men’s mustaches from getting drenched while sipping coffee or tea, and has evolved into a lifetime of sharing a love and knowledge of antiques. Now, Terry Kovel, 92, has been named the “Grand Dame of Antiques” by Antique Trader magazine. Terry and her late husband Ralph Kovel published their first book, Kovels’ Dictionary of Marks – Pottery and Porcelain, in 1953. Before that, antiques collecting was an obscure field left to dry experts speaking, well, dryly about the history and identification through marks of porcelain, furniture and other collectibles. Today, “the Kovel name … is synonymous with the antiques and collectibles field. The couple … were pioneers in the truest sense,” noted the article.

The article details how that first 25-cent purchase of a mustache cup at Niagara Falls by Terry as a child, and husband Ralph’s intuitive observation in the 1950s that there were no resources for average collectors, were the sparks that have made the Kovel name synonymous with antiques. In addition to millions of copies of the annual Kovels’ Antiques and Collectibles Price Guide, there are dozens of other books, the longest-running national newspaper column by the original author, a website, a monthly newsletter, Kovels On Antiques & Collectibles, articles in Forbes and House Beautiful, and last-but-not-least, former television series for PBS and HGTV.

The article also shows pictures of Ralph and Terry through the decades, including the couple gleefully waving pedestals found at a flea market that are still in Terry’s home today, and on home guru Martha Stewart’s TV show, with Martha intently reading a page in one of the Kovels’ books. 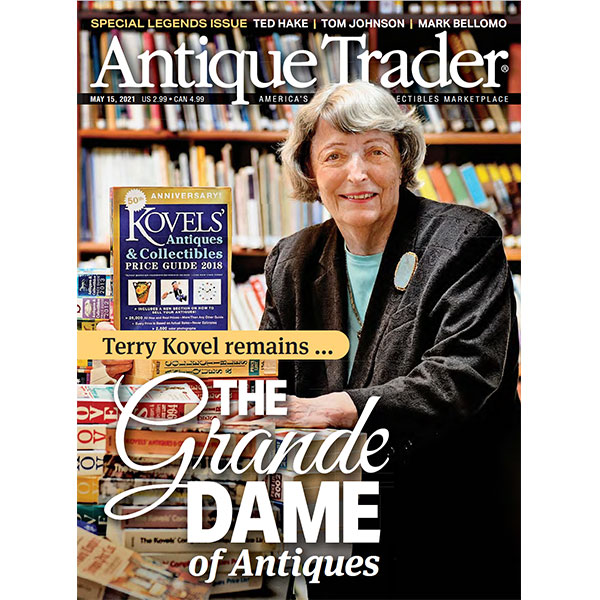 Terry Kovel on the cover of Antique Trader magazine, May 15, 2021 edition.

3 responses to “Terry Kovel Honored in “Antique Trader” Magazine: A Lifetime of Antiques and Having Fun”