Sports Fans, you could become a millionaire with your old (or not so old) sports cards.


Check your basement, attic and every nook and cranny for old rookie sports cards. It could make you a millionaire, based on the hot trend right now toward record-breaking auction prices for sports cards. A “perfect” Kobe Bryant rookie card just sold for $1.795 million in an online Goldin Auctions sale, making it one of the most expensive basketball cards ever sold. The 1996-97 Topps Chrome Refractors #138 Kobe Bryant Rookie Card is just one of two in the world in perfect condition. Bryant, 41, a five-time NBA champion, died on Jan. 26, 2020, in a helicopter crash. His daughter Gianna and seven others also died in the crash.


“The enthusiasm for trading cards and memorabilia has never been higher and as even more people recognize the incredible investment opportunity these assets offer, we anticipate that interest will only continue to grow,” Ken Goldin, founder of Goldin Auctions, told ESPN.

Other cards that have grabbed million dollar figures recently include: a 2003 LeBron James rookie card that sold for $1.845 million, a 1909 T206 Sweet Caporal Honus Wagner baseball card for $2.52 million, a signed Tom Brady rookie card that brought $1.32 million, a 1997 Upper Deck Game Jersey card signed by Michael Jordan that was sold with a piece of his jersey and brought $1.44 million, and a 1952 Topps Mickey Mantle card that auctioned for $5.2 million. 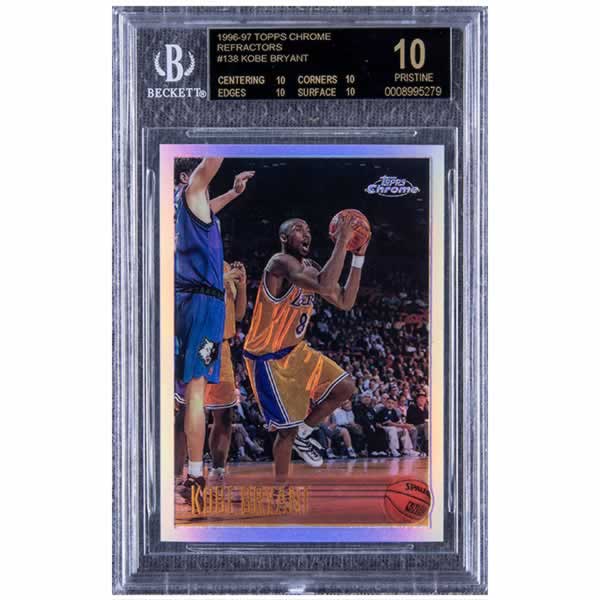