Don’t settle for a store-bought Valentine this year. Rediscover the almost-forgotten puzzle valentines that were popular from 1720 to 1840. Sometimes sweethearts in the early 19th century had to work to discover their romantic messages.

A puzzle purse is a square piece of decorated paper that is folded origami-style to form a star, a box or an envelope-like packet or “purse.” It unfolds to reveal a romantic poem or a trinket like a coin, a ring or a lock of a sweetheart’s hair. Sometimes the folded squares are numbered to help the recipient find the message. An original 12 1/2-in. square puzzle purse, circa 1790-1810, auctioned for $6,250 at Sotheby's in January 2014. When folded, the double hearts on the ends are nestled together. A poem is inscribed in ink in the center square. Photo is courtesy of Sotheby's.

Antique paper puzzle purses are very fragile and may be damaged if refolded. A lucky find would be a puzzle with its matching envelope, even rarer and more expensive than a puzzle purse alone.

Other handmade Victorian puzzle valentines have been forgotten over the years. The Internet has made it possible to find instructions and pictures to make similar puzzle purses and puzzles like these:

In the United States, the style did not change to the familiar lacy valentines until 1848, when Esther Howland of Worcester, Mass., started a company—a group of girls—to make valentines. They used layers of imported lace paper, painted silk and lithographed “scraps” picturing birds, hearts and flowers, and joined them together with paper hinges to create three-dimensional valentines with messages glued inside.

Find prices of valentines and other paper greeting cards in the free online price guide at Kovels.com. 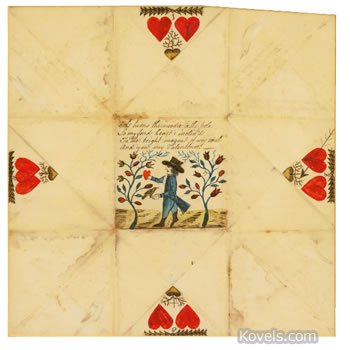