October 16 is National Dictionary Day. It’s also called “Learn a Word Day.” It commemorates the birthday of author and editor Noah Webster (1758 – 1843), who in 1806, published his first dictionary, A Compendious Dictionary of the English Language. He began an extensive revision in 1807 that was finally published in 1828 and contained 70,000 words.

Want to learn a new word? Here are 12 words associated with antiques and collectibles that you may not know. We’ll leave the “use a word three times and it’s yours” practice to you, but you can find them all in our newest book, the just-released Kovels On Antiques Price Guide 2020.

Cameo:  A relief decoration usually of carved stone or shell set on a colored ground to decorate jewelry. Cameo glass was made in much the same manor – parts of the top layer of glass were cut away to reveal a different colored glass beneath.

Coin silver:  Silver of a slightly lower standard than sterling, originally made in the United States from silver coins that were melted down. It was popular from the late 18th century until about 1870 and is collectible today. Spoons are the most common pieces of coin silver. Forks became common after 1830. Not many knives were made because the silver was too soft to cut well. Serving pieces and other items were also made, especially after the mid 1800s.

Ephemera:  Paper items, such as posters, political or movie broadsides, cards, tickets, invitations, etc., that were originally considered “ephemeral” – not meant to last, but to be discarded after use and have since become collectible.

Fraktur:  Pennsylvania German illuminated folk art (later machine printed) documents, such as birth or baptismal records, wedding certificates or house blessings, that were written in calligraphy with watercolor and ink, and decorated with flowers, figures and scenes.

Intaglio:  The Italian word for carving, an engraving or incised design cut into stone or another hard surface.

Marquetry:  Decorative work in which thin slices of materials, including wood, mother-of-pearl, bone, ivory, metals, or tortoiseshell, are inserted into wood veneer that is applied to the surface of furniture or accessories to form geometric patterns or other designs.

Millefiori:  Means “a thousand flowers,” a glass technique in which many small pieces of glass resembling tiny flowers are grouped together to form an overall design. It’s a type of glasswork decoration popular in paperweights.

Ormolu:  Derived from the French for “ground gold,” it’s an alloy using mercury and refers to gilt bronze or brass mounts used to decorate jewelry, furniture and architectural details. The French call it bronze doré.

Pontil:  A metal rod, also called a punty, used to handle and shape hot glass. When it is removed from the glass object, it leaves an irregular “scar” on the base of the glassware that is also called a pontil or pontil mark.

Spatterware:  A colorful English pottery with painted decoration that looks like it was “spattered” on from a brush. Earliest pieces were made in the late 1700s but its heyday was from 1800 to 1850. At that time, spatterware was made in the Staffordshire district of England for sale in the United States. It’s often confused with spongeware, so be sure and read Kovels’ article on spatterware in the upcoming Kovels On Antiques & Collectibles November 2019 newsletter!

Tole:  Painted tin. It is sometimes called japanned ware or pontypool or toleware. Most toleware from the 19th century is painted with an orange-red or black background with multicolored decoration. Look for bins, boxes, coffeepots, teakettles, and trays. 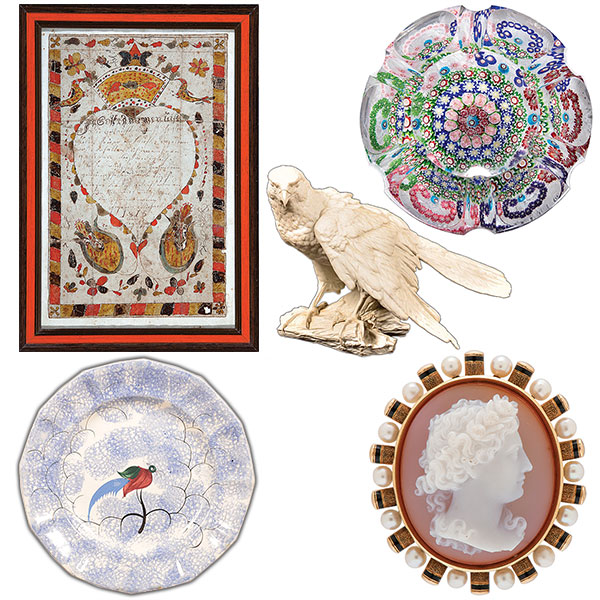 One response to “October 16 is Dictionary Day”