The Tomb of the Unknown Soldier began with the random selection of an unidentified U.S. soldier in France at the end of World War I. His casket was brought home and buried at Arlington on November 11, 1921. A marble sarcophagus was added in 1932. Other unknown servicemen were later buried there, and it is now called the Tomb of the Unknowns.

The November 11, 1921 ceremony at Arlington National Cemetery is pictured on this stereo card, made in 1921 by Keystone View Company of Meadville, Pa., New York City, Portland, Oregon, London, England, and Sydney, Australia. It is marked “Last Tributes of a Nation’s Respect, Services for the Unknown Soldier, Armistice Day, 1921, Arlington, Va.”

Stereo cards have two nearly identical images placed side by side on a stiff backing. They measure about 3 1/2 in. by 7 in. When viewed through a hand-held stereoscope (stereo viewer), a three-dimensional image can be seen. Stereo cards and stereoscopes were most popular from 1854 through the 1930s. Subjects included war scenes, landscapes and images of international travel. Keystone was formed in 1892 and was the major publisher of stereo cards from about 1920 until the 1950s.

Arlington National Cemetery sits on the bank of the Potomac River in Virginia, overlooking Washington D.C. It was established during the Civil War on land that had originally been the home of George Washington’s step-grandson, George Washington Parke Custis, son of John Parke Custis, a child of Martha Washington by her first marriage. Years later, it became the home of Confederate General Robert E. Lee, who married Custis’ daughter. The Union army occupied the land after Virginia seceded from the Union and turned it into a burial ground for soldiers. On May 13, 1864, 155 years ago this month, Pvt. William Christman of Pennsylvania was laid to rest, and the land was officially designated as a military cemetery a month later.

Memorial Day is celebrated at Arlington National Cemetery each year with a ceremony in which a small American flag is placed on each grave. Traditionally, the President or Vice President lays a wreath at the Tomb of the Unknowns.

Stereo cards start at about $10 at auctions and online. Those that picture significant historical events or famous people sell into the hundreds. Find prices of both stereo cards and stereoscopes in Kovels’ Antiques & Collectibles Price Guide 2019 and in the online price guide at Kovels.com.

Have a good, safe and thoughtful Memorial Day. 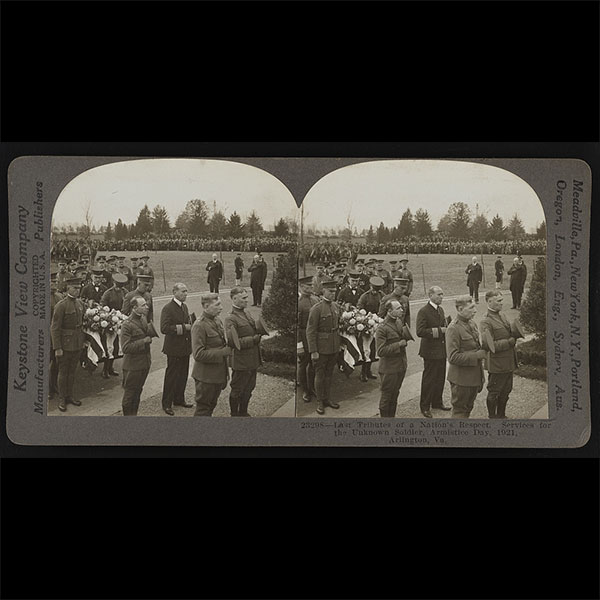 Photo courtesy of the Library of Congress