Love is in the Air

Romance may be in the air, but did you know that Valentine’s Day started out as the Roman festival called Lupercallia that included fertility rites and the pairing off of women with men by lottery? The men sacrificed a goat and a dog, then whipped women with the hides of the animals they had just killed. Young women would actually line up for the men to hit them, believing this would make them fertile. The matchmaking lottery involved young men drawing the names of women from a jar. The couple would be together, so to speak, for the duration of the two-day festival.

Not very romantic, right? Modern Valentine’s Day started sometime in the 14th century. It may have taken its name from a Roman priest and physician who was martyred about 270 by the emperor Claudius II Gothicus. It became more a day of romance (and not whipping).

Valentine’s Day greetings cards started appearing in the 1500s and by the late 1700s, they were being commercially printed. The first printed cards were used in the United States in the mid-1800s, and the elaborate, flowery cards are popular with collectors. Hearts, flowers (usually red roses, the symbol of beauty and love) and Cupid abound.

All types of valentines are popular with collectors and prices range from 25 cents to more than $100. Some collectors hunt for Victorian valentines with die-cut images that open into three-dimensional views. Later versions, like the valentine pictured here, with folded honeycomb paper that pops open into a design, are more expensive. This valentine is from the 1920s-1930s and is worth about $10 to $20. 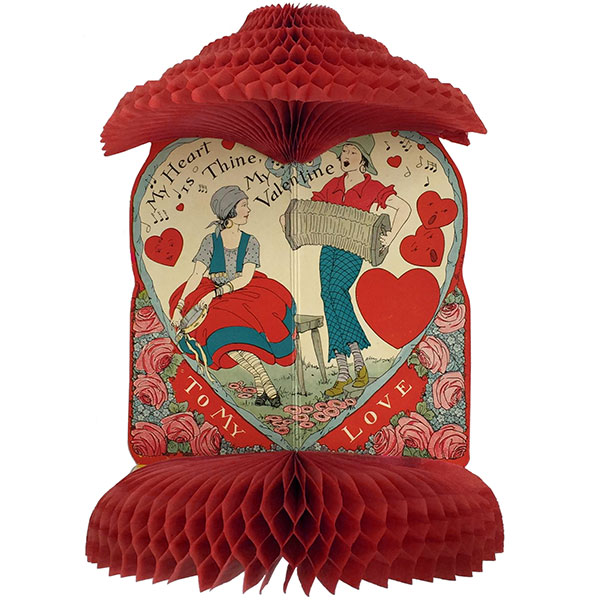