Purple Heart Day is observed each year on August 7. It’s a time for Americans to pause and honor the brave men and women who were wounded or killed in combat.

Last month, a Purple Heart medal was found in a box of housewares dropped off at a Goodwill donation center in Arizona. It was inscribed with the name of the recipient and his rank. A Goodwill associate posted pictures of the medal on its social media to try to find the sailor’s family. They also contacted a nonprofit organization, Purple Hearts Reunited, a group that works to return lost or stolen medals to vets and their families. According to military records, this Navy seaman second class was declared missing in action when his ship sank in 1942. He was posthumously awarded the Purple Heart.

And they were successful! By the end of the week, a great-nephew of the sailor confirmed the medal and family members would be reunited. The “keeper” of the sailor’s medal was his sister, who would often carry it in her pocket; the family believed it brought her comfort as she got older. After her death, the family believes the medal was accidentally put into a box of donations as her possessions were being sorted.

The Purple Heart was first called the Badge of Military Merit, an honor created by General George Washington in 1782. It took the form of a stitched purple cloth heart edged with lace or binding that was presented to enlisted soldiers who had performed a “singularly meritorious action.” The color purple represented courage. But it wasn’t used much after that. In 1932 the award was revived by General Douglas MacArthur to honor brave actions and soldiers wounded on the battlefield. The new medal was designed as a “Purple Heart” with a bust of George Washington in profile and issued on the bicentennial of Washington’s birth. Originally, it was only meant for those serving in the Army or the Army Air Corps then a presidential order in 1942 opened the Purple Heart to members of all branches of the military.

Purple Heart Day remembrances are held by veterans’ and military organizations, and some civic offices and sports teams pause in recognition of Purple Heart recipients. Fly an American flag, take a moment to reflect, or take the time to listen to the stories of a solder or veteran. 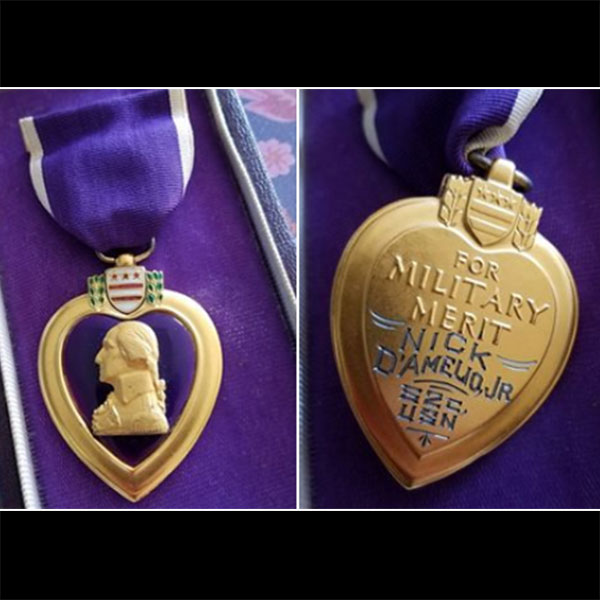 I had no idea there was a purple Heart day… my mind is blown just yesterday i received a box of donations and in it I found a purple heart!!!! Id love to have another reunited story like this one. How do I help figure mine out?

This Purple Heart was found at a local Goodwill in Tucson, AZ. The Goodwill associate had a great eye when sorting donations. This was covered on the local news station in Tucson. What a wonderful ending!

You can also give them to any of the Veterans Clubs and they will also help to find the family. If no family can be located they will place them in a place of honor in a glass case and read their names aloud on Aug. 7th in a ceremony.

Also, it is Illegal to sell purple hearts.