Barbie dolls attracted collectors at an auction in Ohio and they are featured in a sale report in Kovels On Antiques & Collectibles September 2021 newsletter. Most desirable were vintage Barbies made from 1959 to 1969. See the top-priced Barbie, a 1960 example with a brunette ponytail and her original striped swimsuit that sold for over $1,200, as well as other limited edition models dressed in fashionable vintage clothing ensembles.

Mocha pottery was among the cheapest ceramics available in the late 18th and early 19th centuries, but not these days. It was made mostly around Staffordshire, England, used in simple homes and taverns, and exported to the young United States. Pieces were decorated in earthy colors with patterns that suggest cat’s eyes, earthworms, twigs, trees, and seaweed. Kovels’ September issue pictures mocha pitchers, bowls, mugs and other items that sold at auction in Pennsylvania from the low hundreds up to $13,000.

Think an old, rusted oil can is worthless? Well, think again! Kovels’ latest issue reports on vintage oil cans that sold at auction in Indiana. Old oil cans with interesting graphics appeal to collectors of “petroliana,” “automobilia,” and antique advertising. A bidder with deep pockets took home a 5-gallon Lincoln Motor Oil can with an image of Lincoln for $861. See some of the other motor oil cans and learn about the rating system used by enthusiasts to describe their condition.

A recent New York auction featured a single owner’s collection of European and Asian porcelain and ceramics. Amassed over decades, the collection included early European porcelain examples from many of the most prominent makers of the 1700s. Kovels’ September newsletter pictures an assortment of porcelain items related to tea service—tea cups, teapots and a tea canister among them—along with their auction prices and a Dictionary of Marks that lists identifying marks.

Terry shares a peek at the newest Kovels’ Antiques & Collectibles Price Guide 2022 which will be available at bookstores and Kovels.com later this month. Read about the Miami museum founder and collector who visited Cleveland, becoming an enthusiastic admirer of all the city has to offer, and see some of his favorite sites. The illustrated Collector’s Gallery answers readers’ questions about a mandolin harp, an elaborate porcelain picture, a Norman Rockwell print of Abraham Lincoln, and a Lincoln rocker. And more than 70 antiques and collectibles are listed in the September Buyer’s Price Guide. 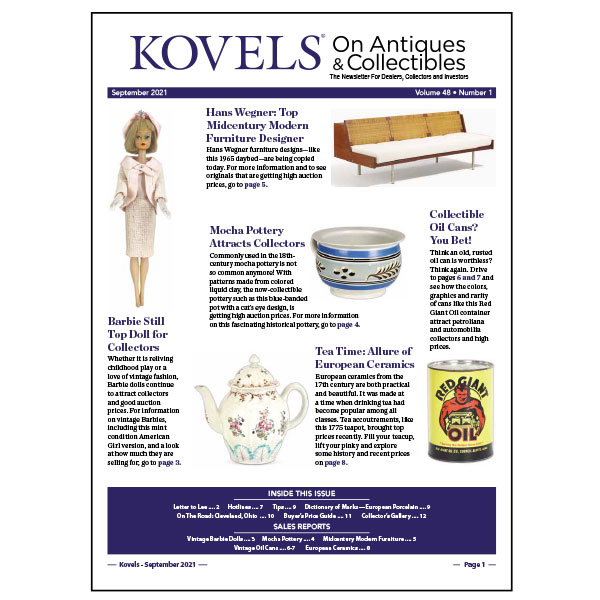