Amphora pottery auctioned in Pennsylvania is featured in a sale report in Kovels On Antiques & Collectibles September 2019 newsletter. Amphora pottery was made during the turn of the century in the Turn-Teplitz region of Bohemia, and is known for unusual shapes, striking glazes and cleverly executed art nouveau decoration. See the auction’s top price Amphora vase with a figural dragon draped around the top that sold for $9,600. Other pictured pieces feature long-haired maidens, moths, spider webs, frogs and vines.

The spotlight was on lighting by Max Ingrand at a New York City auction. Ingrand, a French stained-glass artist and decorator, is noted for his modern, innovative design and use of textured glass. Kovels’ September newsletter pictures an Ingrand ceiling light of chiseled and opaque glass that auctioned for more than $100,000, his “Dahlia” chandelier with cut, curved and colored glass “petals” that brought $35,000, as well as other pieces he designed for the Italian company Fontana Arte.

A California auction offered more than 100 lots of Stickley furniture It included pieces by the five Stickley brothers who learned skills at an uncle’s furniture company before starting their own businesses, working in various partnerships. A sideboard by Leopold and John George (L. & J.G.) Stickley was the most expensive piece at $8,400. Find more pieces by L. & J.G., Gustav, and the other Stickley brothers in Kovels’ September issue.

Sculpted glass vases made by Orrefors of Sweden sold at auction in Cincinnati and Kovels’ highlights a handful of examples made in the 1950s using the company’s Ariel technique. Unique to Orrefors, the method trapped air bubbles while encasing the colored glass. The prices ranged from $200 to $1,000; pictures are in the September issue. And collectors are always crazy for quilts where fabric, frugality and friendship combine to make practical, colorful coverings. Find late 18th- and early 19th-century quilts in popular patterns along with their prices in the latest Kovels’ newsletter.

A special article on the used vinyl music records market discusses how to research, price, buy and sell vintage singles and albums. Kovels’ popular illustrated Collector’s Gallery answers readers’ questions about a stoneware crock, a glass “parade cane,” an English lamp table and a Tiffany silver tray. The September Dictionary of Marks identifies and dates marks used by Orrefors Glassworks. And more than 70 antiques and collectibles are listed in the September Buyer’s Price Guide. 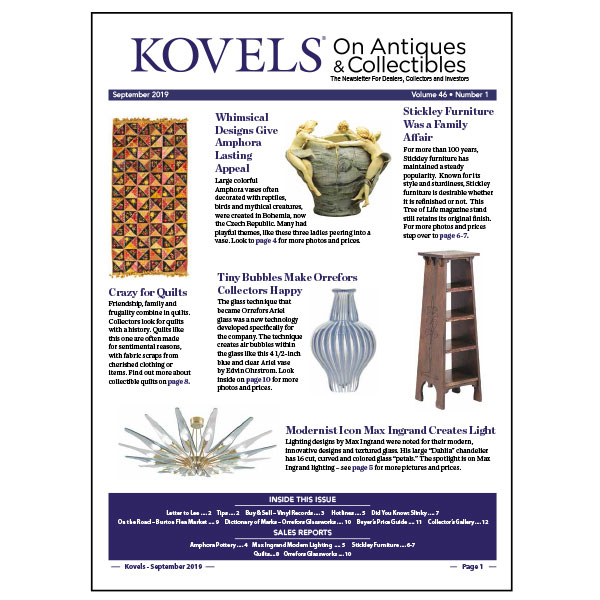