Halloween collectibles cast a spell on collectors at a Pennsylvania auction and examples are featured in a sale report in Kovels On Antiques & Collectibles October 2021 newsletter. Halloween costumes, decorations and candy containers were made to be used for just a short time and then gathered up and thrown away, which makes the items that have survived more collectible. Bidding was scary high — $31,000! — for an unusual 1920s “veggie man” candy container. Readers will have a treat — no tricks — seeing it with other unique vintage Halloween decorations along with their prices.

A recent auction in London featured Japanese art from a single owner’s collection and Kovels’ October newsletter focuses on inro. Inro are small personal cases with interlocking compartments that were part of traditional costumes for Japanese men, used to carry important objects such as seals and medicines. See examples and prices of inro from the 1700s and 1800s with intricate and symbolic lacquered decoration and learn how they were carried.

Collector interest was high (and so were the bids!) for the pottery of husband-and-wife team Edwin and Mary Scheier that sold at auction in New Jersey. The Scheiers were pioneers in the modern studio pottery movement who worked together for nearly 70 years creating distinctive vessels with raised and incised whimsical figures and shapes and rich colored glazes. Kovels’ October issue pictures examples of Scheier stoneware pots and bowls with their hefty prices.

Owning a part of television and movie history is irresistible, and collectors at a Rhode Island auction had fun with props associated with some of their favorite shows and actors. A bidder paid $2,000 for the lot that took top price honors — the “LEM” (Lunar Excursion Module) hatch prop used in the 1997 movie Apollo 13. See the LEM hatch and other props, including one of Cookie Monster’s cookies, in Kovels’ latest newsletter.

And let Kovels’ October issue introduce you to some of the Goldscheider ladies — painted pottery wall masks modeled as sophisticated women’s faces with applied curls and details that elegantly captured the style of the day. A dozen of the beauties were offered in a U.K. auction, and Kovels’ pictures several of the masks with their winning prices.

Don’t miss Kovels’ October market report on collectible sneakers with prices that will knock your socks off. The illustrated Collector’s Gallery answers readers’ questions about a Larkin secretary desk with bookcase, a carved wood block, an early 1900s container for men’s detachable shirt collars, and a Bavarian porcelain tea set. The October Dictionary of Marks lists some of those used by Victorian furniture manufacturers. And more than 70 antiques and collectibles are listed in the October Buyer’s Price Guide. 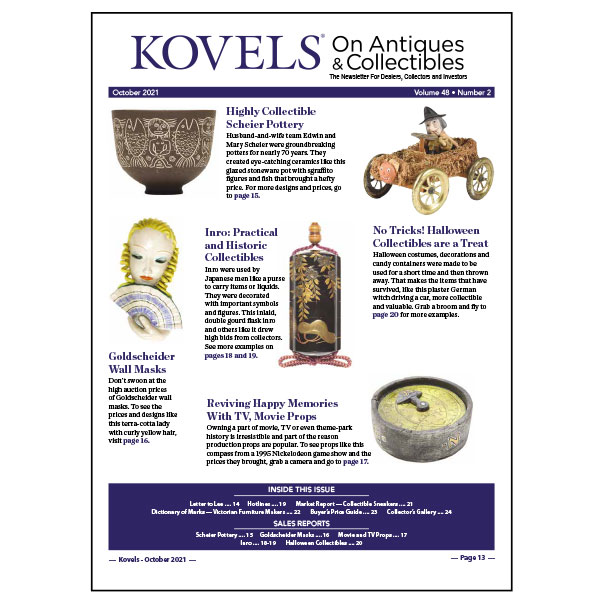