Spatterware in a variety of shapes and patterns auctioned in Pennsylvania and is featured in a sale report in Kovels On Antiques & Collectibles November 2019 newsletter. Spatterware is colorful mid-19th-century English pottery with decoration that looks like it was “spattered” on from a brush. See the child’s cup and saucer with red and yellow spatter bands that sold for $708, a three-color spatter bowl that brought $649, as well as plates with spatter borders.

A selection of Argenta pottery sold at auction in New Jersey. Argenta was made by the Swedish Gustavsberg factory and is known for its distinctive green glazes and silver overlay decoration. Among the pieces pictured in Kovels’ November newsletter are vases, bowls and covered jars with mythical creatures and art deco figures that auctioned from $700 to $1,500. Collectors always love the bargain bling of costume jewelry, and a recent sale in Indianapolis included pieces made and marked by such recognizable names as Miriam Haskell, Trifari and Napier. Necklaces, pins and earrings await in Kovels’ latest issue.

Remember Danish Modern furniture? It was slim, practical and reasonably priced in the post-war 1950s. It’s becoming popular again, especially with young collectors and those who enjoy its sleek, simple lines. While prices of pieces by the era’s most influential designers soar at auction, Kovels’ November issue pictures unmarked teak tables, bookcases and seating that auctioned in Austin, Texas, for affordable prices.

And a recent sale in New Jersey included a variety of collectible toys made of celluloid, a lightweight material considered to be the first plastic. Find vintage celluloid toys with moving parts like a windup guitar-playing Easter bunny, a Santa Claus nodding-head and a Mickey Mouse roly poly, along with their prices, in Kovels’ November newsletter.

Kovels’ explores real and reproduction phrenology heads and pictures an example. The popular illustrated Collector’s Gallery answers readers’ questions about a Royal Doulton prototype character jug, English game plates, Roycroft sconces and a Russian propaganda poster. The November Dictionary of Marks identifies and dates marks and cyphers used by the costume jewelry makers represented in the sale report. And more than 70 antiques and collectibles are listed in the November Buyer’s Price Guide. 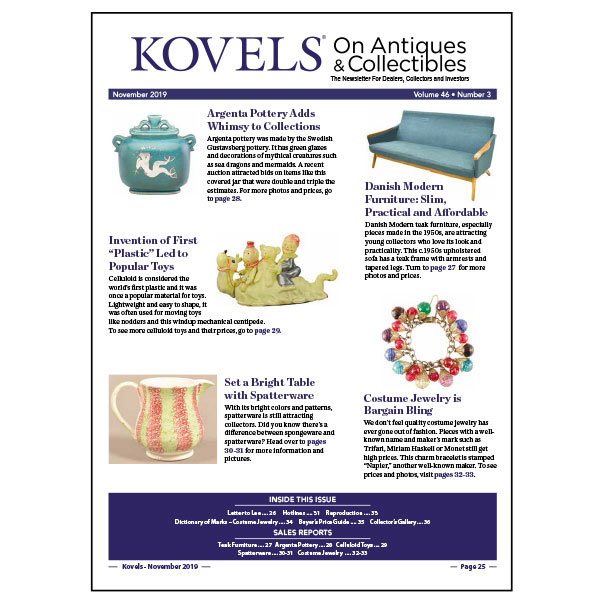 One response to “Kovels On Antiques & Collectibles November 2019 Newsletter Available”