Studio pottery by husband and wife team Gertrud and Otto Natzler sold for high prices at a New Jersey auction of modern design, and is featured in a sales report in the May 2022 issue of Kovels On Antiques & Collectibles newsletter. The Natzlers met through their love of ceramics and began a collaboration that lasted for more than 40 years. Kovels’ newsletter pictures the top priced vase with volcanic “Flowing Lava” glaze (she threw the pot, he developed the glaze) that auctioned for $59,000 along with other examples that ranged from $1,700 to $21,000.

A recent London auction showcased all things miniature. The sale celebrated intricately designed items in a broad range of collectible categories, from miniature art, books, and globes to silver, micro mosaics, and sculpture, that could fit into the palm of a hand. Enjoy the examples — a tiny silver tankard, a miniature silver paint box, an 18th century pocket-sized terrestrial globe and more — pictured with their max prices in Kovels’ May newsletter.

Movie posters are popular collectibles that can be as vivid and memorable as the films they represent. Collectors may be attracted to the subject matter, the films’ stars, or just the visual appeal. Kovels’ latest issue pictures movie posters that were featured at another London auction. Find examples that range from well-known classic films to rare and unique cult titles along with their prices.

For collectors looking for fascinating items related to mysticism, sorcery, vampires and other exotic themes, the past offers striking examples. Unusual taxidermy, a sorcerer’s mirror, a gypsy’s crystal ball, a vampire killing kit and an 18th century thief’s tools are a few of the “out-of-the-ordinary” objects sold at an unusual auction in England. See these oddities and some others and learn what bidders paid to make them theirs in the May issue of Kovels’.

And last but not least, who doesn’t love toys that zoom? Tin windup motorcycles were included in a toy auction in Ohio and the May newsletter pictures an assortment of motorcycles that sold from a few hundred to a few thousand dollars.

The Kovels go “on the road” to the Miami Beach Original Antiques Show, back after a couple years’ hiatus, and share some of the things that caught their eye. May’s Dictionary of Marks lists marks found on Georg Jensen silver. The Collector’s Gallery answers readers’ questions about an old English gravy boat, a pair of figural ceramic bottles, cloisonné vases, and a Staffordshire platter. And more than 70 antiques and collectibles are listed in the May Buyer’s Price Guide. 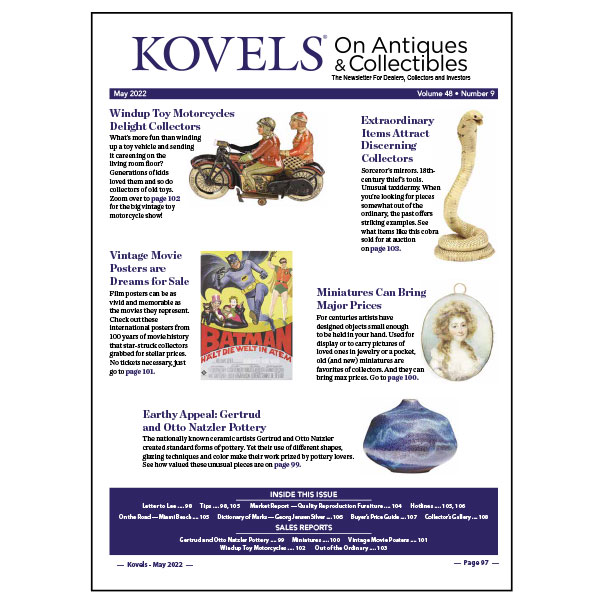 Kovels On Antiques & Collectibles May 2022 Newsletter