Toy replicas of farm vehicles from a single owner’s collection were auctioned in South Dakota and are featured in a sales report in the March 2022 issue of Kovels On Antiques & Collectibles newsletter. Most were in excellent condition, many in their original boxes, and some brought remarkably high prices. Kovels’ newsletter pictures the top seller, a starter set of five New Holland toy farm vehicles that that brought more than $10,000, along with John Deere, Farmall and Ford tractors that ranged from $40 to $8,800.

Great vintage modern style chairs can be found at flea markets, auctions, and house sales and knowing designers and makers is important to their value. A Chicago auction offered many examples of “modern” chairs sought by both collectors and homeowners. Enjoy the design—and high prices—of chairs by George Nakashima, Pierre Jeanneret, Gio Ponti, and other midcentury designers in Kovels’ March newsletter.

A recent auction in Illinois offered a collection of early phonographs and related items. Kovels’ latest issue pictures a turn-of-the-century gramophone, a double-horn “talking machine” disc phonograph, as well as an early 5-inch disc, a replacement spear-tip horn, and a Charlie Chaplin dancing phonograph toy with prices that went from $1,000 to $57,000.

A London auction featured two hard-to-find collectibles among the offerings—glazed stoneware figurines by George Tinworth and Dutch art pottery. Tinworth was an English pottery artist who worked for the Doulton factory at Lambeth, England, from 1867 until he died in 1913. Collectors love his whimsical mice figurines and Kovels’ March issue pictures examples that sold from $950 to $5,000. Kovels’ also pictures vases and a plate made by early 20th century artists at pottery factories in the Netherlands. Most had Art Nouveau style decoration and brought $500 to $1,200.

And last but not least, diving equipment is a popular subset of maritime collectibles. A recent Kansas auction offered old diving apparatus and Kovels’ pictures vintage examples used by U.S Navy divers. See the old Mark V diving helmet that sold for more than $20,000 along with a newer Mark 12 diving helmet, suit, and boots, and other related equipment in the March newsletter.

The Kovels examine the market for antique and vintage fishing lures and list some makers to look for. Enjoy Terry Kovel’s tips on smart flea market shopping. The March Dictionary of Marks lists marks found on costume jewelry, while the Collector’s Gallery answers readers’ questions about a cloisonné vase, a dry sink, an elephant perfume locket, and a decorative pottery decanter used to chill beverages. And more than 70 antiques and collectibles are listed in the March 2022 Buyer’s Price Guide. 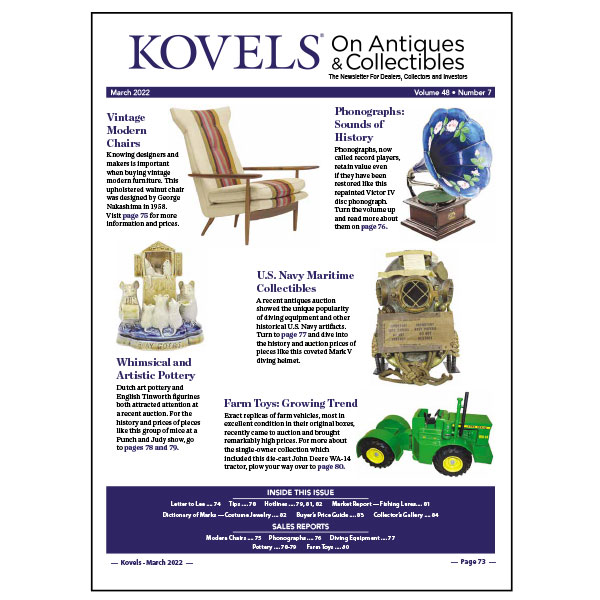