Comic books auctioned in Dallas are featured in a sale report in Kovels On Antiques & Collectibles March 2019 newsletter. Comic book collecting is becoming more popular, especially with recent movies featuring Marvel and DC characters. Among the comic books pictured in Kovels’ – Amazing Fantasy No. 15, the first appearance of Spider-Man, that sold for $144,000, and The Fantastic Four No. 5, by the late iconic comic book artists Jack Kirby and Stan Lee, that brought more than $16,000.

The signature red Coca-Cola logo is recognizable all over the world and its advertising has become part of 20th-century Americana. Kovels’ March newsletter pictures Coca-Cola advertising collectibles that sold at a winter auction in Pennsylvania, including signs, trays – even a 1940s cooler and a 1950s thermometer – along with their prices. And Kovels’ latest issue contains 19th and early 20th century American painted furniture that sold in Massachusetts. Practical furniture designed for everyday use, pieces featured include a slat-back cupboard, dry sink, blanket box and more, each with old paint and a price under $1,500.

Another Massachusetts auction included everything needed to re-create a typical Arts and Crafts style room. Starting with a Stickley chair, an oak table and a Charles Rohlfs bench, the Kovels chose a hammered copper humidor, Roycroft bookends, green organic Grueby vase and other details to finish the look. And large decorative porcelain plates called chargers, made in factories around Limoges, France, sold at auction in Kansas. Pictures and prices of examples can be found in Kovels’ March issue along with the coordinated Dictionary of Marks illustrating the markings that signify their makers, decorators and retailers. 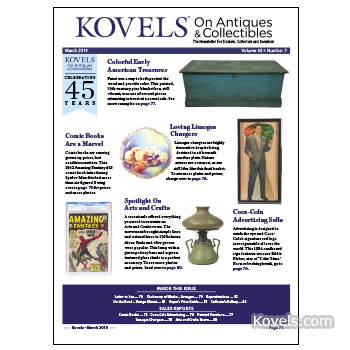