A collection of colorful toys that once cost only a single penny auctioned for big prices in New Jersey and they are featured in a sale report in Kovels On Antiques & Collectibles June 2019 newsletter. Called penny toys by collectors, most are small, inexpensive tin toys made in Germany in the late 1800s and early 1900s. Find a “walking” rabbit penny toy that went for $6,000 (that’s 600,000 pennies!), a clown and pig push toy that brought $1,680, and others with moving parts that sold for more than $500.

Some of the best and most unique high-quality silver in the Arts and Crafts style was made by Chicago metalsmiths in the early 1900s and many pieces auctioned recently in Chicago. Kovels’ pictures a sampling of those items, including a pitcher with an applied monogram and undertray that went for $1,750, a sauce server with an ebony handle for $325, a sugar cube rack with an arched handle for $218, and more. The accompanying June Dictionary of Marks lists notable Chicago metalsmiths and pictures the marks they used.

Alvar Aalto was a leader in 20th-century Scandinavian modern design. An auction in Finland included many items designed by Aalto and others who worked at Artek, the design firm he co-founded in 1935. Kovels’ June issue pictures a pair of Aalto-designed lamps that sold for more than $18,000, as well as tables, a chair, a chest and a room divider screen.

Bottles of all kinds sold at a Connecticut auction and Kovels’ focuses on cobalt blue ones. A top seller was a blue c.1820 historical flask with an eagle on one side and masonic arch and emblems on the other side that sold for $71,000. Others range from a figural Bunker Hill monument cologne bottle to a whimsey cup made from an ink bottle mold. And they are all cobalt blue – pictured with prices in Kovels’ June newsletter. And nearly 30 carriage clocks that were high technology in the late 1700s were auctioned recently in Massachusetts. They were portable, spring-driven and handy for 18th and 19th century travel before the invention of the wristwatch. Kovels’ pictures decorative examples – some with a chiming alarm – that sold from $700 to $3,000. 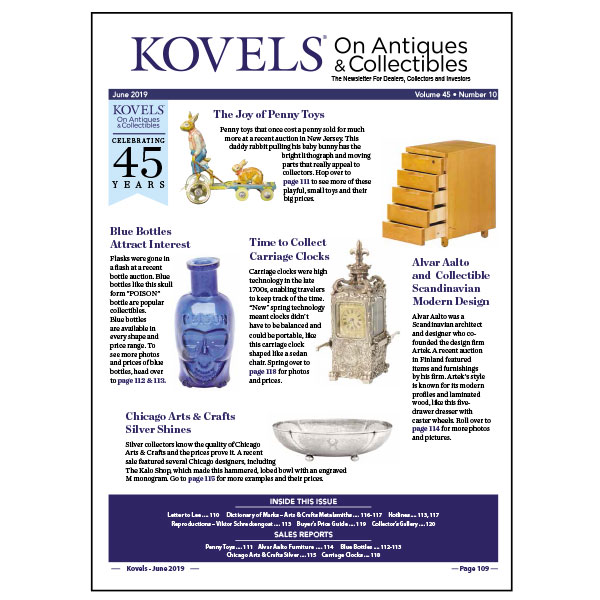