Collectors were wowed by the vintage robots and space toys offered at an Ohio auction, and they are featured in a sale report in Kovels On Antiques & Collectibles July 2021 newsletter. Most of the toys flashed lights or made sounds, and many auctioned for out-of-this-world prices. See the top-priced flying Spaceman that brought more than $50,000 and other entertaining examples in Kovels’ latest newsletter.

Kovels’ July issue offers a peek into the decorating and collecting acumen of a late Washington, D.C., business woman and philanthropist whose furnishings were auctioned in New York. Many pieces by notable artists and designers sold way over estimates. Enjoy a peek at the Giacometti bench that soared to $3 million, the Lucie Rie pottery bowl that topped at $340,000, the sleek pink velvet Tor Wolfenstein sofa that brought over $30,000, and more.

Nineteenth- and early 20th-century board games brought high prices at a Pennsylvania auction. Kovels’ July issue pictures colorful examples with patriotic and sports themes, including a “Champion Game of Base Ball,” published in 1889, complete with the original spinners, game pieces and even unused score cards, that took top price honors at nearly $20,000.

Travel back through the early days of automobiles with a look at distinctive car hood ornaments, called “mascots” by collectors, that sold in an online auction. Some are elegant, some are whimsical, and some indicated a brand or model of the car. But all added flair and Kovels’ latest newsletter pictures an assortment with selling prices.

Art pottery collectors pay great attention when Newcomb pottery examples come up for auction. So prices were high at a sale in New Orleans that featured a single owner’s impressive collection of Newcomb pottery, decorated by women art students at Newcomb College in Louisiana from the 1860s to the 1940s. Kovels’ July issue pictures pieces with designs reflecting the Southern landscape that sold from $4,000 to more than $17,000.

Don’t miss Terry Kovels’ reflections on her Fourth of July celebrations over the years and the collectibles that made them more festive, or the July market report on the stylish outdoor furniture designed by Walter Lamb. The Dictionary of Marks explains the markings and design elements found on Canton china. The illustrated Collector’s Gallery answers readers’ questions about a Shirley Temple plate, an old dance purse, a McCormick Harvesting Machines advertising calendar, and an Eastlake dresser. And more than 70 antiques and collectibles are listed in the July Buyer’s Price Guide. 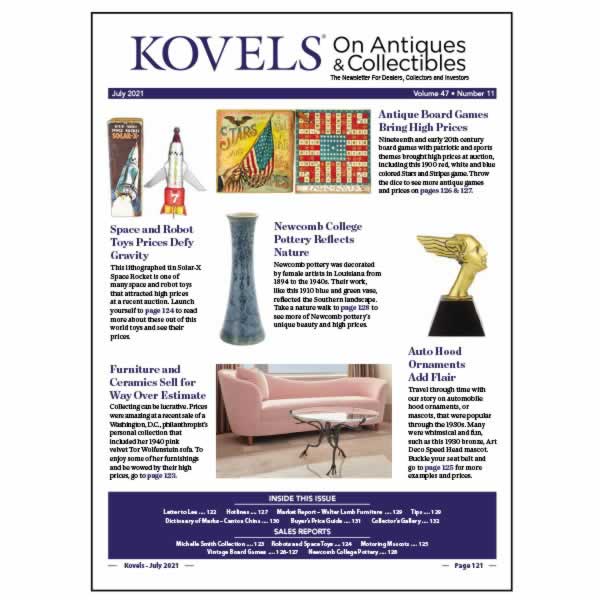