A recent art and design auction in Paris highlighted innovative furnishings designed by English artists in the 1970s and ’80s, and is featured in Kovels On Antiques & Collectibles January 2023 newsletter. Pictured with prices are chairs made of unconventional materials that pushed the boundaries of design, such as a shapely Queen Chair by Tom Dixon, a sculptural Big Easy chair by Ron Arad, and a curvy Ram Chair by André Dubreuil, with some unusual decorative accessories.

Artists and admirers of art know that an artwork’s frame can make a work complete. A Florida auction had more than 400 museum-quality frames that were part of the collection of a well-known master frame maker, restorer and collector. Kovels’ January newsletter pictures frames in a variety of styles that auctioned from $305 for a 1920s “American School” black and giltwood frame to $10,000 for a giltwood frame with heavily carved Asian-style detail.

Butter making was an essential trade in old America and collectors love the antique molds, stamps, and other tools used to make it. Nearly 100 butter-making implements attracted melt-in-your-mouth prices at a Pennsylvania auction; see examples in Kovels’ latest issue.

An Indiana auction offered about 200 fancy antique oyster plates, and Kovels’ January newsletter pictures an assortment of majolica and porcelain oyster plates by Minton, Haviland and Wedgwood, along with their gourmet prices.

And last, but not least, Kovels’ pictures vintage toy cars that were on display at an Ohio auction. Most were tin friction- or battery-operated cars made by German or Japanese toy makers. Enthusiasts were able to add models from a bubble-shaped BMW Isetta with a high bid of $810 to a sleek Ferrari Super America that went for $390 to their collections.

The Kovels go “on the road” to Washington, D.C., to visit Hillwood Estate, Museum and Gardens, the home of the late Marjorie Merriweather Post that is filled with 18th-century French and Russian decorative arts. The January 2023 Dictionary of Marks identifies marks used by American companies that made silver hollowware and flatware. The Collector’s Gallery answers readers’ questions about an unusual hand-painted sign from the 1860s, a portico clock, a pendant made from a cutout Mexican coin and a Bitossi dish. And more than 70 antiques and collectibles are listed in the January Buyer’s Price Guide. 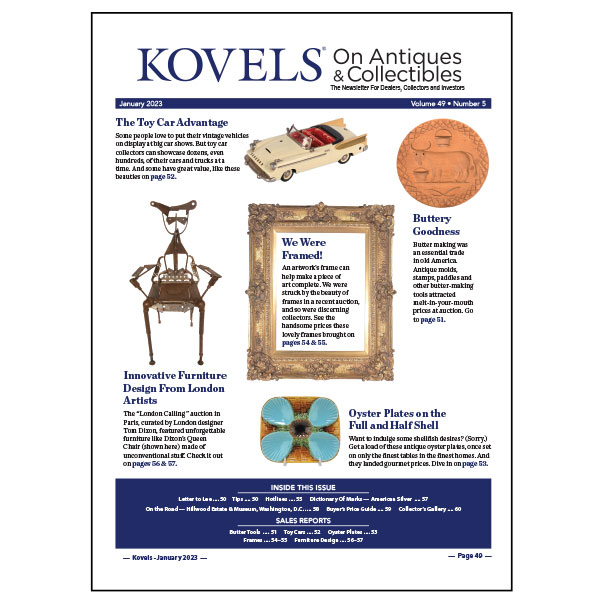