A vintage Eisenberg Ice holiday tree pin decorates the cover of the December 2020 issue of Kovels On Antiques & Collectibles newsletter. The pin sold at a costume jewelry auction in Indianapolis, and is included in a Kovels’ December sale report that pictures other vintage Eisenberg pieces – festive pins, earrings and clips – along with their prices, for lots of holiday sparkle.

Kovels’ December newsletter is certainly on target with their sale report on an incredible collection of antique shooting gallery targets that auctioned in Missouri. Enjoy looking at the cast iron shapes such as a smiling man in the moon, cowboy, rabbit, alligator, owl, rooster, playing card suits and more. Imagine the sounds – the pings and the clangs – as well as hitting the bullseyes – one has wings that flapped, a few revolved and one even lit up – but mostly be awed by their prices that shot up to $36,000.

A recent Chicago auction featured wall clocks designed by George Nelson & Associates. Kovels’ December issue pictures examples of their innovative and sculptural designs made with unexpected materials, from the enameled steel and aluminum “Asterisk” clock to the stylized “Steering Wheel” clock of enameled metal and vinyl, which brought prices from a few hundred dollars to a few thousand.

More than 200 vintage advertising tins were offered at a Pennsylvania auction. Some were figural, such as a tin shaped like a Swiss-style cottage or a windmill. Others had winter themes with holly or snow. Prices for the tins peaked at almost $3,000 for a 1930s double decker bus that once held candies. Kovels’ December newsletter pictures more priced examples with great details that collectors can enjoy as decoration or storage.

And last but not least, read about the sale of a collection of children’s books that included many of L. Frank Baum’s titles about the magical Land of Oz. Kovels’ pictures a first edition of The Wonderful Wizard of Oz as well as later works such as The Scarecrow of Oz and Glinda of Oz with their prices.

The December Dictionary of Marks lists marks used by lesser-known makers of costume jewelry. The illustrated Collector’s Gallery answers readers’ questions about a zeppelin Christmas ornament, a Wedgwood pitcher, an Art Deco sugar and creamer set, and a vintage novelty cocktail set. And more than 70 antiques and collectibles are listed in the December Buyer’s Price Guide. 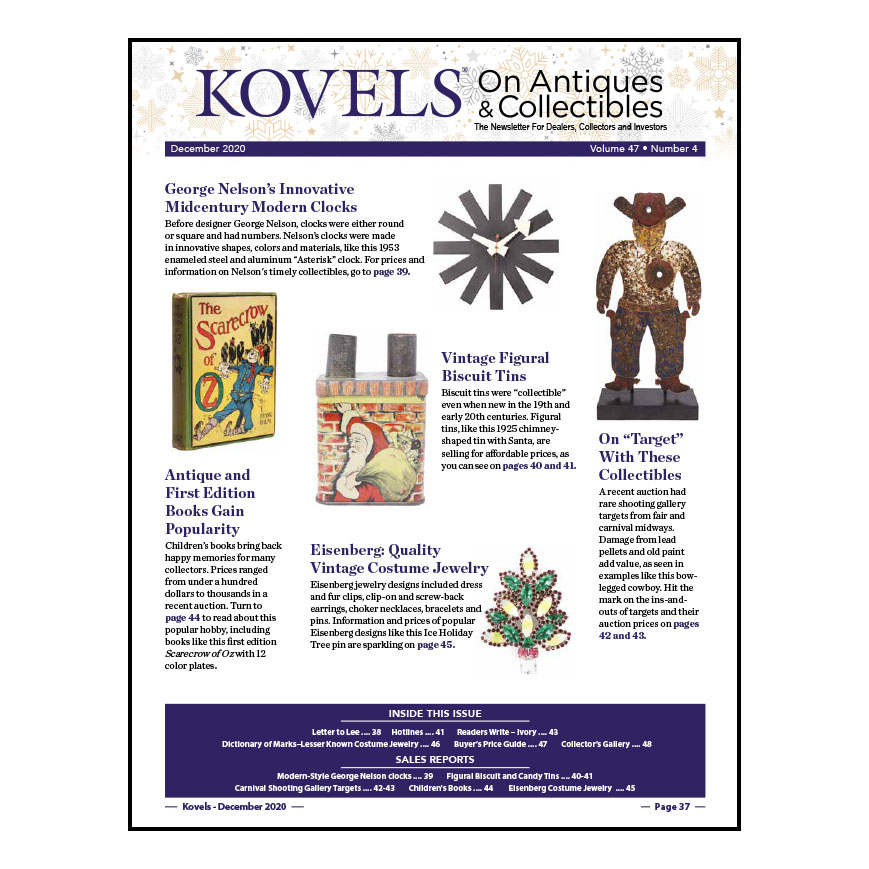