Collectors were charmed by the Victorian baby rattles offered in a Pennsylvania auction, and they are featured in a sale report in Kovels On Antiques & Collectibles August 2021 newsletter. Most of the rattles were sterling silver with bells or whistles to make entertaining sounds. See the top-priced rattle—it’s in the form of a sphynx with a whistle tip and sold for over $1,300—as  well as a Tiffany example with elaborate dangling bells that brought $640, and other cute keepsakes in Kovels’ latest newsletter.

Indianapolis 500 collectibles brought top dollar at auction in Indiana as collectors raced to get their hands on old programs, credentials, flags, and other memorabilia from the famous 110-year-old automobile race. Kovels’ August issue pictures the top lot toy tin race car, a model of the 1952 winning car, which went for over $2,000; a checkered flag autographed by many of the 1958 drivers, including that year’s winner; and other fun Indy 500 mementos.

Wedgwood is best known for its blue and white Jasperware and its fine china with beautiful decoration, but not many collectors are familiar with the striking majolica items made by Wedgwood artisans from 1860 to 1940. Another Indiana auction featured almost 20 pieces of Wedgwood majolica and Kovels’ August newsletter pictures plates, platters, a teapot and a cheese keeper with naturalistic designs, botanical elements and vivid colors that sold from $100 to $1,000.

Collectors still admire the enduring beauty of Lalique glass, and early René Lalique pieces are attracting very high bids. A successful bidder at a London auction paid over $38,000 for a textured glass vase shaped as a coiled serpent that was designed by René Lalique in 1924. It was signed “R. Lalique,” which helped account for the high price. Kovels’ August issue pictures other pricey pieces of Lalique, from the early, mid- and late 20th century, as well as a coordinating Dictionary of Marks that lists the different signatures found on Lalique glass.

Chairs are simple and useful, but that doesn’t mean they can’t be design-y! A Chicago auction included modern-style chairs, many by notable midcentury designers. See chairs in ergonomic forms with unexpected shapes and materials and their wide array of prices in Kovels’ latest issue.

Don’t miss Terry Kovels’ reflections on a perfect day spent—in person!—”on the road” at Ohio’s Burton Antiques Market, and enjoy seeing some of her favorite finds. The illustrated Collector’s Gallery answers readers’ questions about a German porcelain planter, a copper water still, a silver gravy boat, and a pudding mold. And more than 70 antiques and collectibles are listed in the August Buyer’s Price Guide. 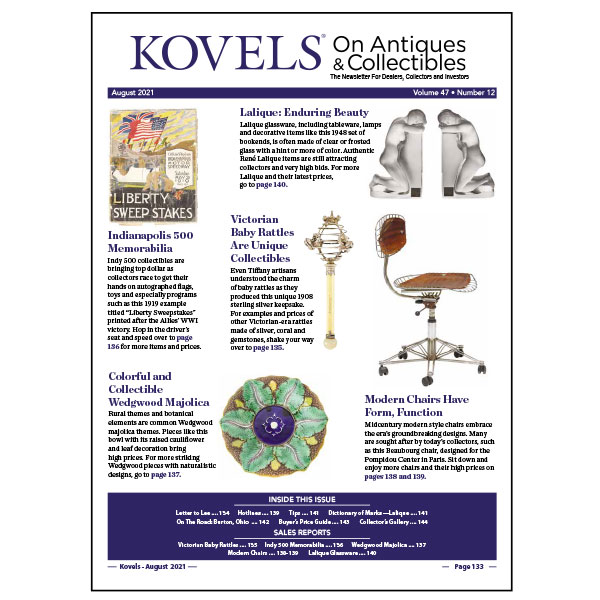