Lamps made in the early 1900s by the Handel Company lit up a recent Massachusetts auction and are featured in a sales report in the April 2022 issue of Kovels On Antiques & Collectibles newsletter. Collectors prize Handel lamps for their craftsmanship and the beautiful painted scenes on glass shades that softly lit early 20th century rooms. Kovels’ newsletter pictures the top seller, a domed shade with an intricate underwater scene on a bronze mermaid base that auctioned for $20,000, along with others that ranged from $1,000 to $5,000.

Furniture by Robert Whitley is attracting more attention and brought hefty prices at a modern design auction in New Jersey. Whitley was a third-generation craftsman, knowledgeable in both antique and contemporary furniture design, who built museum-quality reproductions of 18th and 19th century pieces as well as his own contemporary work. Enjoy examples of Whitley tables, seating, and a sculpted platform bed that ranged from $1,700 to more than $10,000 in Kovels’ April newsletter.

A recent New Jersey auction celebrated the “boys of summer” while baseball collectors seized the opportunity to own some Boston baseball history. The auction featured memorabilia that decorated a famous early 20th century Boston pub, McGreevy’s 3rd Base Saloon, considered one of the first sports bars in America. Many of the lots were owned and used by the bar’s owner, Michael “Nuf Ced” McGreevy. Enjoy a look at early fan collectibles and pick up some tips on collecting sports memorabilia in Kovels’ latest issue.

Royal Doulton Bunnykins nursery dishes and figurines charmed buyers at a Florida auction, where big prices were paid for small, rare figurines. See the “Trick or Treat” and “Mystic” Bunnykins in prototype colors that each sold for more than $3,000 as well as other rare Bunnykins in Kovels’ April issue.

And Steiff plush toy animals have been popular since they were first made in 1880. Kovels’ latest newsletter pictures examples that auctioned in Ohio—a teddy bear (of course!), dinosaur, alligator, turtle, rabbits—and even a Steiff doll—and their prices. Complementing the sales report is the April Dictionary of Marks which informs readers about Steiff “button-in ear” and chest tag markings and the dates they were used.

Kovels’ April newsletter also has tips on spotting Fenton art glass fakes and reproductions. Terry Kovel shares some thoughts and tips on spring cleaning. The Collector’s Gallery answers readers’ questions about a trinket box shaped like an antique iron, a pewter eggcup, an early 20th-century telephone on a stand, and a gout stool. And more than 70 antiques and collectibles are listed in the April Buyer’s Price Guide. 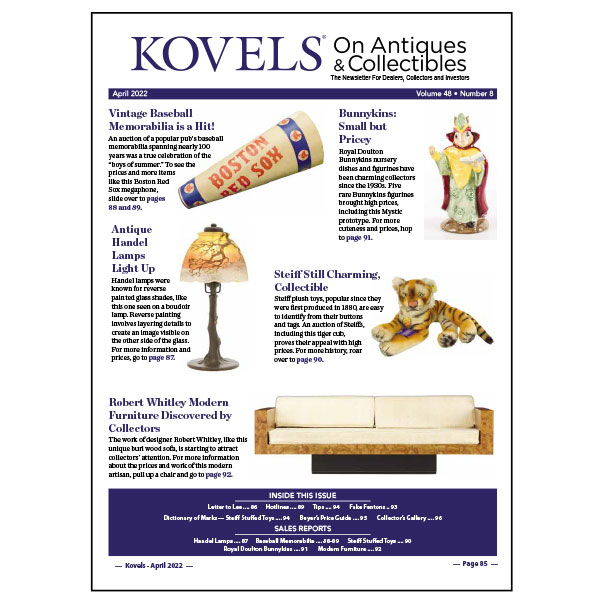