Colorful jewelry made by modern Native American artisans was auctioned in Ohio and is featured in a sale report in Kovels On Antiques & Collectibles April 2020 newsletter. Find pictures and prices of bracelets, a bolo tie and a necklace, mostly silver and decorated with turquoise, coral and other stones, that sold from $300 to $30,000.

A New York auction featured items from the personal collection of the legendary decorator Mario Buatta. Buatta loved dogs, pictures of dogs, flowery fabrics, and an English country house style that reflected in his work. Learn more about Mario Buatta and see some of his favorite pieces along with their selling prices in Kovels’ April newsletter.

Kewpies have been around since the very early 1900s and collectors are still beguiled by their big eyes, impish smiles and those tiny wings. An assortment of Kewpie figurines was recently auctioned, also in Ohio. See the top price Kewpie in a bathtub that auctioned for over $10,000 as well as other Kewpie cuties in Kovels’ latest issue.

Blanket chests may be simple wooden boxes, but their sturdy construction and painted designs offer glimpses into America’s past as well as great storage. Kovels’ April newsletter pictures blanket chests. See examples from the red-painted chest made in Connecticut about 1825 that sold for $252 to the chest with intricate scrolls and flowers made in New York about the same time that brought $7,800.

And a single owner’s collection of Rookwood pottery was auctioned in New Jersey. Rookwood is always a collector favorite and more than 100 lots were offered. Prices soared to more than $37,000 for a vase decorated with yellow poppies by notable Rookwood artist William McDonald. See this and other signed Rookwood pieces in Kovels’ April issue.

Kovels goes “on the road” to California to visit some out-of-the-way places with art and antiques. The popular illustrated Collector’s Gallery answers readers’ questions about a vintage Fish & Game Commission badge, a Royal Bayreuth pitcher with playing cards, a novelty item with a strange picture inside, and an early 1900s sewing machine. The April Dictionary of Marks identifies conjoined letter marks found on silver. And more than 70 antiques and collectibles are listed in the April Buyer’s Price Guide. 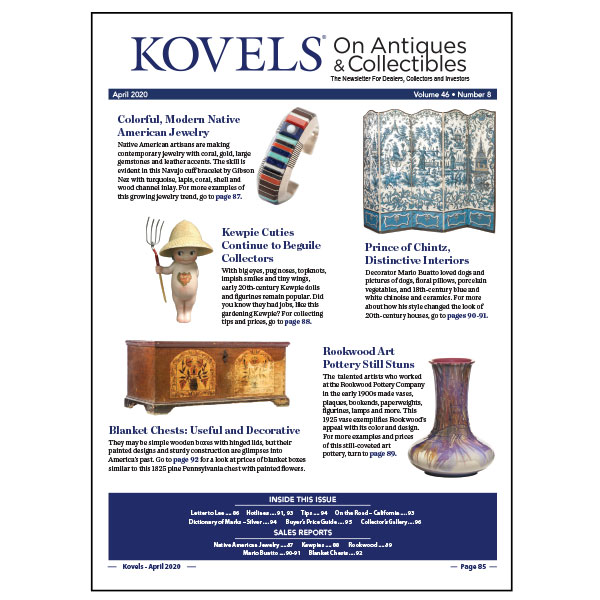