Decorate for Easter with a primitive folk art bunny like this one. It was made in the 1960s by Silvio Zoratti (1919-1992) of Conneaut, Ohio. Zoratti, a stone carver, made folk art-carved wooden cartoon figures that resembled American presidents, religious icons, a menagerie of wild and domestic animals, and other portraits in wood, stone and cement. He filled his yard with the painted wooden figures to entertain his grandchildren. Many, like this rabbit, have inset eyes made of marbles.

Soon after Ed Sullivan introduced the Beatles to his television audience in the early 1960s, Zoratti, an Italian-American, carved “Musicians,” his portraits of the longhaired Fab Four. The group was one of his most admired carvings. Another was a nine-foot high totem pole made to resemble American presidents’ heads.

He carved for his own enjoyment. During his lifetime none of his artworks were for sale. His colorful wood carvings deteriorated because of the effects of the snowy northeast Ohio winters. Many required annual repairs, were repainted or even discarded; but the stone carvings and cement figures last longer.

Find more folk art prices in the FREE online price guide at Kovels.com and in Kovels on Antiques & Collectibles Price Guide 2017, available in our online shop and in your local bookstore. 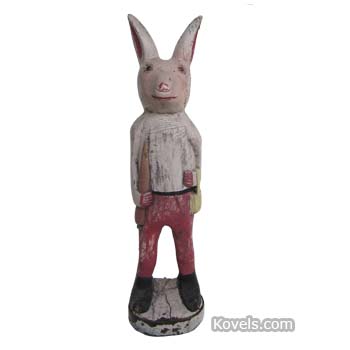