The Ford Mustang turns 50 this month. While the first Mustang rolled off the Ford assembly line in March 1964, it wasn't introduced to the public until April 17, 1964, at the New York World’s Fair. Named after a World War II fighter plane, it was the first of a new type of car called the “Pony Car,” a low style with a sleek, long hood and short trunk, designed for four people. There was nothing else like it at the time, and more than 400,000 sold the first year.

Car enthusiasts and collectors refer to the earliest model year as 1964 1/2, since it was a mid-year release, but Ford sold it as a 1965. It was introduced in hardtop and convertible versions, with a fastback model added the next year. The sticker price of a 1964 1/2 Mustang started at $2,368, equivalent to almost $18,000 today. A vintage model can now sell in the tens of thousands, depending on condition. The die-cast metal 1964 1/2 Ford Mustang toy shown here was made by Welly and sells for about $14 in an eBay shop. 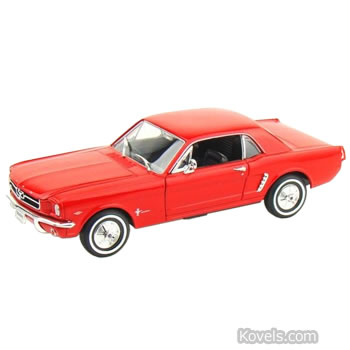