Q: I’d like some information about this miniature blue and white plate that pictures a mother, child, and three geese on a village street. It’s about 3 1/4 inches in diameter. There is a small hole in the back so it can be hung up. It’s marked with a stylized letter ”A” with three wavy lines across it, “Denmark,” then a small letter “u” above number 63 over 2010, and “Dragor Amager.” There are script initials below that. One letter looks like a capital “L.” Does it have any value?

A: Your miniature plate, called a “plaquette,” was made by Royal Copenhagen Porcelain Factory, which was founded in Copenhagen in 1775. The letter “A” with three wavy lines is sometimes called a beehive mark and was used from 1903 to 1969. The three wavy lines were part of Royal Copenhagen’s mark for several years and represent the three major bodies of water in Denmark. The letter “A” is for Aluminia, an earthenware factory that bought Royal Copenhagen in 1882. Plaquettes like this were made for tourists to buy as souvenirs of their trip to Denmark. Series 2010 included over 80 different scenes. The scene on your plaquette is number 63 in the series and pictures Dragor, a town on the island of Amager, Denmark. Royal Copenhagen made hundreds of these little dishes, most in this round shape but some were square. The small letter “u” under the “M” in “Denmark” is the date code and indicates this plaquette was made in 1959. The script initials, “KL,” were used by the designer, Kaj Lange. Most plaquettes like your sell for about $10. A few that picture special scenes are worth $20. 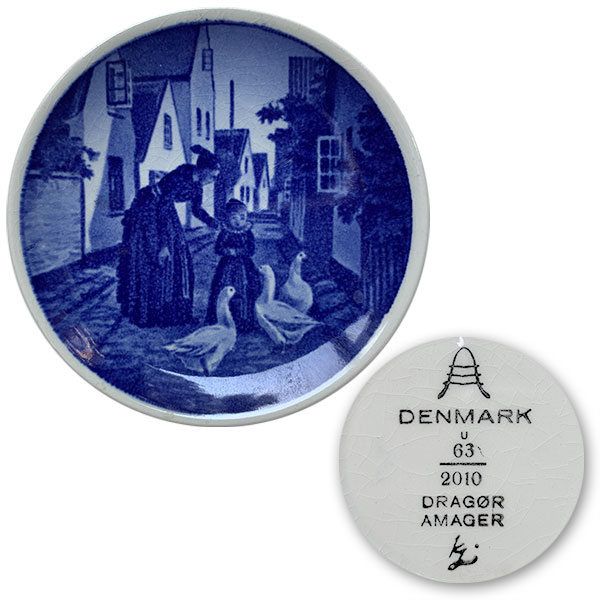