Q: I found this broken plate in the backyard at Mum’s in Australia. It was in a rubbish pit of the previous 19th-century house that had bottles buried in 1900-1910. I glued it back together, but I can’t identify it. Can you tell me the manufacturer and what year it was made? Was it an expensive plate back in its day and would it have been worth anything now?

A: This printed mark was used by W.H. Grindley & Co. from about 1880 to 1914. The company was in business in Tunstall, Staffordshire, England from 1880 until 1960, when it was bought by Alfred Clough Ltd. The mark pictures a steamship on top of a globe with the pattern name “Ideal” in a banner above the ship. Before 1891, the word “Tunstall,” instead of “England,” was used in the mark. There were two Grindley patterns named Ideal. The earlier one has a center design of a goose flying over the landscape and a more ornate border. The numbers below the mark signify the English registry mark. It is hard to read, but looks like “213154,” which indicates the design was registered in 1893. Grindley earthenware and ironstone dinnerware was not expensive. The plate in good condition would sell for about $10 to $12 today. 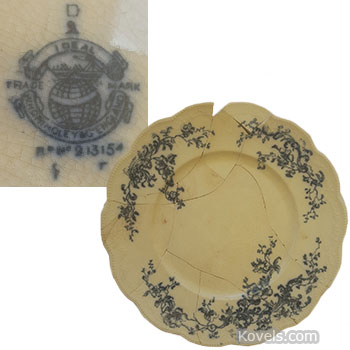