For nearly 10 years, the debate has raged. Could an elaborately decorated wooden bed frame purchased online at that time for 2200 pounds (about $2,500 at the time) really be the marriage bed of the first English Tudor king, Henry VII, and his bride, Elizabeth of York? Or is it as it was advertised – a Victorian-era piece of furniture? While the jury is still out, odds are that the bed is, indeed, where the couple slept. Their union ended the War of the Roses (1455-1485), a series of civil wars fought for control of the English throne.

When the buyer, English antique dealer Ian Coulson, received his “Victorian four-poster bed,” he instantly realized it was far older than the Victorian era. Marks on the timber indicated it had been made with medieval tools, and the age-blackened wood shows repeated repairs, unusual in a bed only about 150 years old. Other telling indicators of royal origins are the traces of medieval paint found in its crevices, including specks of an incredibly rare and expensive pigment made from lapis lazuli. Called ultramarine, it was, at the time, more expensive than gold.

The find, once it is 100-percent verified, is especially rare considering the belief that no royal furniture survived the English Civil War (1642–1651). Despite centuries with no provenance, Jonathan Foyle, a Tudor historian and former curator at Historic Royal Palaces, is convinced the bed is authentic. “Even the Westminster Coronation Chair has less to say than this.” 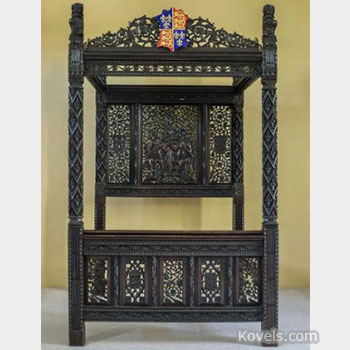 One response to “Tudor-Era Wedded Bliss?”