Stuffed squirrels don’t sound like expensive collectibles, but four pairs of 19th-century boxing squirrels, each mounted in a wooden box, sold for $17,700 to $22,420 at a Rachel Davis Fine Arts auction in Cleveland in September 2013. We counted about 50 bids for each pair. The red squirrels were mounted by William Hart & Sons in about 1850. Hart was one of the most famous taxidermists in England and did several sets of squirrel “Pugilists.” His son, Edward, was also famous as a taxidermist and made more of the anthropomorphic squirrel sets. The c.1850 squirrels that sold at auction wore boxing gloves, which weren’t required in real boxing rings until the Marquess of Queensberry rules went into effect in 1867. 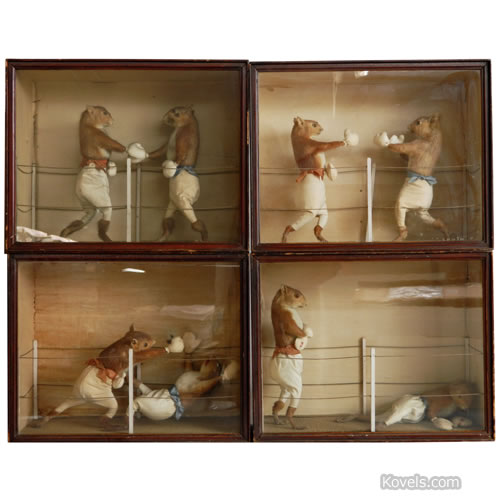