Wow! Dodo birds are popular. We had dozens of emails about the poor discarded dodo last week and although we would like to thank each emailer personally, time insists that we do it this way. Emails from Africa, New Zealand, England, Australia and other spots around the world told us that it is “Dead as a dodo,” not “Dumb as a dodo.” If we judge by Google, “dead” is about three times as popular as “dumb.” But dumb is the favored expression in the United States. Several of you remember seeing stuffed dodos in museums. As far as we can learn, there are skeletons of one foot and two heads still known, plus about 20 bones found in the past few years. The American Museum of Natural History in New York City (where one emailer said she saw the dodo years ago) is said to have a complete skeleton of a single bird. But any realistic dodo in a museum has skin and feathers that are the work of an artist.

You also told us that the dodo was not dumb, just “trusting.” They hadn’t met “greedy, lazy, shortsighted examples of “Homo sapiens” before.” “…they were all eaten by white settlers and/or their animals, like cats, dogs, and pigs.” More facts you sent: Two dodos were taken back to Europe, one to the Netherlands, another to England. The head of one was saved, the other was eaten. It is also said that while in Europe, the birds ate iron and rocks. The dodo was discovered in about 1507 and was extinct by 1681.

All of this made us wonder if the very popular though very dead dodo could be a collectible. Yes. The people on Mauritius have made souvenirs for years, including stuffed toy dodos, wooden or glass birds, sheet music of songs with dodo in the lyrics and, of course, anything showing the “Alice in Wonderland” characters. Our kids always joke that we have collected one of everything. Not true. But we do have an Edris Eckhardt (1907-1998) WPA figurine of Alice’s friends, the White Rabbit and the Dodo. The famous Cleveland glass and ceramic artist made the Dodo’s feathers beige and blue. 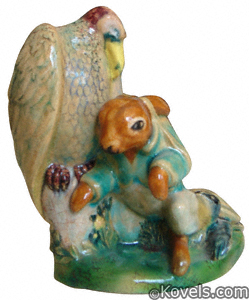